Happy Birthday to a Legendary Percussionist

January 15 marks the birthday of one of the greatest drummers of all time: Gene Krupa.

Born in Chicago in 1909, Krupa had been groomed for the priesthood by his parents, but decided to go his own way. He started playing the instrument in the 1920s and his powerful, busy drumming style came to the foreground in the 1930s, the heyday of what’s known as “big band” jazz.

You might know his drumming best from the classic Benny Goodman rendition of “Sing, Sing, Sing,” featured in countless films about the 1930s and World War II, available here in this 1938 Carnegie Hall performance. Krupa’s heavy rolls on the toms gives a burly, ominous underpinning to the soaring brass and woodwinds.

Krupa’s style helped define the era, but his fame faded some as the size of popular jazz combos shrank after World War II. He enjoyed a resurgence in the 1950s, including a film about his life, and retired in the 1960s, opening a music school and playing the occasional show.
Krupa died in 1973, but his influence is monumental among drummers, even outside of jazz. KISS drummer Peter Criss trained at Krupa’s school, while Neil Peart of the prog rock band Rush has paid explicit tribute to Krupa at concerts. He pops up occasionally in pop culture, such as the street drummer in Martin Scorsese’s Taxi Driver, advertising his ability to play in Krupa’s style. In a film wallowing in the debauchery and sleaze of 1970s New York, the Krupa mention is a brief, melancholy callback to a more elegant time in the city’s history.

Krupa’s drum set is now enshrined at the Smithsonian, alongside that of his friendly competitor Buddy Rich, with whom Krupa held several “drum battle” concerts, starting in 1952.

Want to learn more about Gene Krupa? Check out his biography.

Happy Birthday to a Legendary… 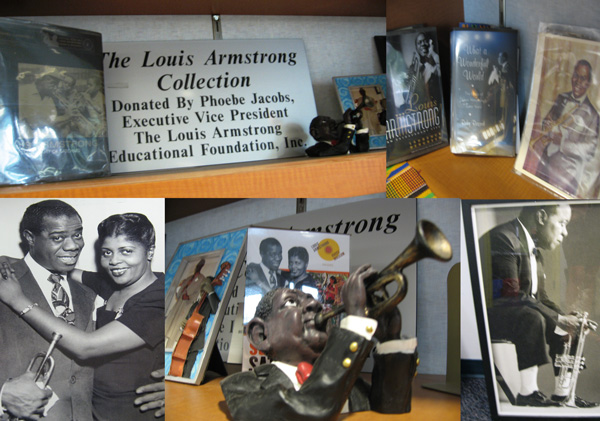 It’s All About Armstrong at Queens…