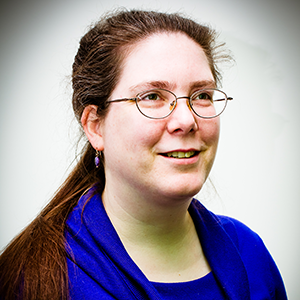 Genevieve Cogman is a British fantasy writer whose fifth book in the Invisible Library series comes to Queens Library when it’s published this November. Cogman told Queens Library Magazine about how the rules of the library in her books were established, her writing process, influences, and more.

She says she established the rules of the place known as the Invisible Library as she wrote the first book. The library keeps the balance—the heroine, Irene, is a librarian who travels between worlds to steal books and bring them back to the library. Cogman admits some of the rules came about to prevent Irene from resolving things too easily.

As a writer, she has evolved to do more plotting and structure in advance than she used to, but she still finds that good ideas emerge as she is writing, and she has to go back and fold them in so that it looks as if they were always part of the story. Cogman quotes Lois McMaster Bujold, who said, “The author always reserves the right to have a Better Idea.” As a child, “I was always visiting the library and I always had a pile of books I’d borrowed in my bedroom.” She explains that she mostly read fiction, even as an undergraduate student who got library cards from multiple local libraries—“It was stories that I wanted.” Her tastes in nonfiction as a child ranged from Gilbert and Sullivan and famous murder stories to the history of witch hunts and voodoo.

Today, Cogman finds the Internet convenient to do research or order books for her own permanent collection, but she finds that her local library “is still a useful place to go if I’m looking for general background material on a particular topic—and it’s still a lovely building and an excellent library.”

She finds inspiration in authors who tell stories that she enjoys reading, which is a goal of her own for the stories she writes—that people will enjoy reading them. Some contemporary authors she admires include Lois McMaster Bujold, Barbara Hambly, Max Gladstone, N.K. Jemisin, Charles Stross, and Melissa Scott. She has “been a lover of fantasy and science fiction ever since I first discovered them, and I suppose I write what I love. I admire a lot of writing set in the ‘real’ world, but when I read, I look for stories that involve something else.” Other genres she enjoys include detective fiction, historical fiction, and even some spy fiction, all of which she says have found their way into her Invisible Library series.

Cogman has always loved reading. “It’s always been my main interest, my escape, my way of understanding the world around me, my way of getting a new perspective on things. I was the sort of child who’d go round to visit friends and then spend the time going through their bookshelves...I couldn’t do without it. I need that window on other worlds.”

The author believes that stories don’t necessarily teach lessons, but notes that “sometimes we work out what we do believe in by establishing what we disagree with”—and cites one of Terry Pratchett’s characters as saying, “He does not require that we think of Him, only that we think.”

Her favorite books often cause her to think about things that she hadn’t even considered until the book made her think about them. One of her favorite moments in Bujold’s book Memory “is when the protagonist is offered everything that he thinks he wants, and is forced to confront the price of accepting it. And it’s not an easy choice.” She advocates that everyone read what appeals to them, saying, “Have no shame. Don’t be embarrassed. Read what you want. It’s all reading...Reading is a window on somewhere else. Find the window that you enjoy. Don’t feel obliged to force yourself to read something you really don’t enjoy.” As an example, she confesses she’s never managed to finish Frankenstein. What she does like includes “patchwork and Tolkien and Sherlock Holmes and the Takarazuka Revue.”

“Everyone has different tastes, different hobbies, and different things they love. We get far more out of life by sharing the things we love with friends who love them as well, and being accepting and tolerant of other people’s tastes where we disagree with them—just as we hope they will also accept and tolerate our own weird enthusiasms. The world is wide enough for us all.”