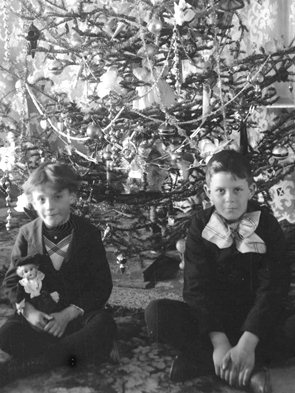 The tradition of the Christmas tree was already well-established in the United States by the end of the 19th Century. Although the first national Christmas tree wasn’t set up until 1913, (based on the large tree that was decorated in Madison Square Park in Manhattan in 1912), Queens Library’s photo archives include not one, but three photographs of the Christmas trees that stood in the home of the Homeyer family in Jamaica, N.Y., between 1897 and 1905.

From an historical standpoint, these three photos are not remarkable. They’re living room interiors, shot in varying qualities of light. In some you can see a hearth. The most striking of the images is the photo from 1904, in which the two children of J.A. Homeyer sit in front of the tree, staring up at the camera.

It frequently feels like there’s an unbridgeable gap of feeling and comprehension between ourselves in the present and the subjects of photos taken more than a century ago. But not in this shot. The children sit naturalistically, not clad tightly in starched tunics. One clutches a doll.

It really could be that this photo is the product of the first generation of fathers getting in everyone’s face with the newest tech toy. The camera he used could have been a Christmas gift—the equivalent of a flat-screen TV or a digital SLR camera today. Dad gets a new status symbol and can’t wait to try it out on the family. Sounds pretty familiar, right?

I could be completely wrong, too.  Not much information is available about this photo. It’s possible that a professional photographer was hired to take this image and the Homeyers’ other two tree photos. But if that were the case, why wouldn’t the whole family be posed around it?

Instead we see the guileless faces of two children, staring up, perhaps a little impatiently, at the photographer. These children (are they both boys?) are almost certainly dead now, their home probably gone as well. But for everything that’s lost from this era, the feel of a modern Christmas—the eager anticipation of the toys, the entire day spent in the living room, under the tree, the insistence on recording the informality of it all—shines through.

For more glimpses back at life in Queens, New York City and Long Island, visit The Archives at Queens Library, which celebrated its centennial this year. It’s located at the Central Library, 89-11 Merrick Boulevard, on the second floor. 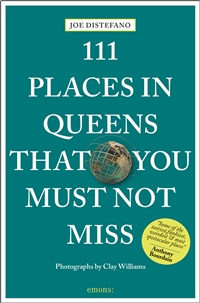 We asked Joe DiStefano, author of 111 Places in Queens That You… 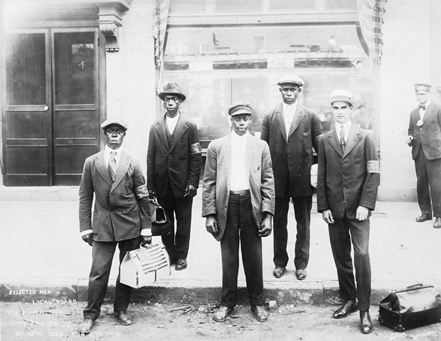 Black History: All Aboard to Yaphank,…

They stand looking at the camera, their faces neutral, their…

The tradition of the Christmas tree was already well-established in…