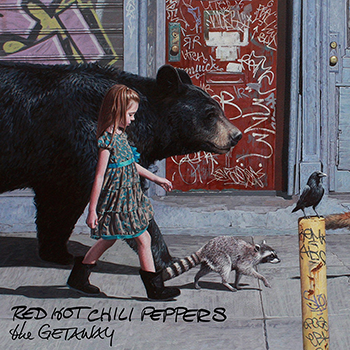 Check out our music recommendations for August 2016!

Red Hot Chili Peppers, The Getaway
Few rock groups of the '80s broke down as many musical barriers and were as original as the Red Hot Chili Peppers. They created an intoxicating new musical style by combining funk and punk rock together (with an explosive stage show to boot). In 2016, the Red Hot Chili Peppers released their 11th studio album, The Getaway. In an attempt to escape the creative quagmire evident on their last several LPs, the band recruited Brian “Danger Mouse” Burton, who produced the record and co-wrote five of its tracks. Unsurprisingly, The Getaway easily stands as the Peppers’ lushest album to date. Watch the video for the song “Dark Necessities."

Craig Morgan, A Whole Lot More to Me
A Whole Lot More to Me is the ninth studio album by American country music artist Craig Morgan. He co-wrote nearly half of the album's 12 tracks and for the first time co-produced the set with recording wiz Byron Gallimore (who worked with Tim McGraw, Faith Hill, and Lee Ann Womack). The album's uplifting first single, "When I'm Gone"—rather incongruously—finds inspiration in mortality. Some of the topics in other songs suggest Morgan's sense of adventure: sushi, caviar, champagne, a Versace suit, and silk ties. Like the title, Morgan proves what an open-minded guy he can be. You can stream the whole album on Freegal.

Brad Mehldau Trio, Blues and Ballads
Jazz pianist Brad Mehldau has recorded and performed extensively since the early 1990s. His trio’s latest album could be considered jazz for the average guy, in contrast to his typical classical music influences and deep technical virtuosity. For example, the trio explores the splendid simplicity of The Beatles "And I Love Her," goes on to Cole Porter's "I Concentrate On You" and Charlie Parker's "Cheryl," and finally closes out with a version of Paul McCartney's "My Valentine." It's a deceptively sweet-sounding set which is absolutely absorbing. Perhaps only a musician of Mehldau’s extraordinary powers of invention can do this consistently and to such intense effect, but it works. Listen to “And I Love Her."

Kevin Gates, Islah
Since releasing his first mixtape in 2007, Baton Rouge rapper Kevin Gates' rise to success has been organic. Following his release from prison in 2011, he doubled down and delivered a steady stream of output. Gates' debut studio album was inspired by his daughter, named Islah, which means “to make better." The album was released with few pushbacks and (even more astonishingly) almost no big-name guest spots or features, suggesting that his no-holds-barred candor is working for him. His best music is rooted strongly in the 2Pac tradition of blunt-force honesty, which gives us every good, bad, and ugly thing he has. Watch Gates perform "2 Phones" and share his story on The Wendy Williams Show.

Paul Simon, Stranger to Stranger
Raised in Queens to first-generation Hungarian-Jewish immigrants, Paul Simon copyrighted his first song, “The Girl for Me,” with Art Garfunkel when he was 14. He has since soared to musical heights with the release of his groundbreaking Graceland album and has worked with musicians all over the world. He was even selected as one of the "100 People Who Shaped the World" by Time magazine in 2006. His latest CD, Stranger to Stranger, is a record that nearly draws together the man’s entire accrued vernacular. It's as inviting, immaculately produced, jokey, and unsettled a record as any he has ever made. Just some stuff in the head of a 74-year-old New Yorker, spun casually into art in that sagely, choirboy, and everyman voice. Watch the video for the first single, “Wristband."

case/lang/veirs, case/lang/veirs
case/lang/veirs is a Canadian-American super-group consisting of k.d. lang, Neko Case, and Laura Veirs. Rather than bring finished songs to the studio, they honored the spirit of collaboration. The result is an album of rare beauty and intelligence, rendered in imaginative arrangements containing sometimes startling harmonies. The most moving moment of an almost faultless album, though, is lang's contribution, “Why Do We Fight?”, where piano, glockenspiel, and a low hum of strings reinforce strummed guitar. While the hooks are mostly vocal-led, producer Tucker Martine and the small band of players color them perfectly. While a collaborative record like this probably won’t yield a follow-up, it’d be a gift if it did. Listen to the track “Atomic Number."

Mike Posner, At Night, Alone.
Until recently, Mike Posner was a bit of a bridesmaid figure of major-label pop, co-writing for Justin Bieber and Maroon 5, but less successful when it came to recording under his own name. But then came “I Took a Pill in Ibiza." Those looking for the same sort of bouncy clubland anthem will not find it on his second album. Instead, it’s an album exclusively optimized for solitude spent immersed in deep thought. The good news is that Posner has one of the most distinctive male voices in pop, and it’s in full force here. Fortunately, the production lets it shine. Watch Posner's acoustic performance of "Be As You Are" for PerezTV.

Neil Young, Earth
Neil Young earned fame both as a member of Crosby, Stills, Nash & Young and as a solo artist. Young has always been a strong advocate for environmental issues, which is the basis for Earth, recorded live last year. The 13 songs, culled from earlier material on the subject, are overdubbed with “choral gleam, extra guitar drama, and noisy approval by a peanut gallery of livestock, turkeys, insects, and crows.” But Earth is not really a “live” album at all. For a collection of songs about food awareness, there is very little organic or even natural about it. Credit goes to the thematic consistency of Young’s songwriting, but also to Promise of the Real, his current backing band featuring Willie Nelson’s sons Lukas and Mika. He's made an album worth spending some time with. Watch a video for the opening track “Seed Justice.”

Musiq Soulchild, Life on Earth
The Philadelphia-born Taalib Johnson (aka Musiq Soulchild) grew up in a household that provided him with an education in '70s soul and the likes of D'Angelo and Lauryn Hill. After six albums for Def Soul and Atlantic, in which he refined his style to produce a string of gold and platinum albums, he is now signed to My Block, the boutique label run by Grammy-winning producer Warryn Campbell. Life on Earth is Johnson's first proper album in five years, and his first outside the major-label system. There are no wacky personas, no sharp left turns. It’s simply the soulful R&B that has become the hallmark of his career. Life on Earth doesn’t rewrite Musiq’s playbook and it wasn’t meant to. It’s simply a back-to-basics album from an artist who has been away from home much too long. Watch the video for the track “I Do.”

American Authors, What We Live For
The American Authors formed while at school in Boston in 2006, but dropped out and relocated to Brooklyn in 2010. On their sophomore album, they play a variety of characters throughout their tracks. They travel with gypsies by way of thick folk vibes (complete with plenty of tambourine action), and paint pictures of desert campfires. They take the stage in a swanky jazz lounge, and then a stage made of crates with a two-stepping crowd. The title track, written by Captain Cuts, sets the tone with the first of many singalong choruses, a solid pick for fans of passionate, radio-ready, summertime spirit. Watch the video.