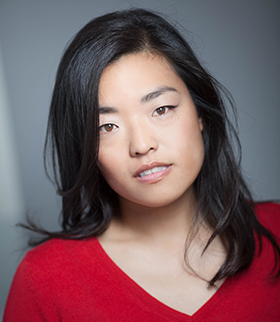 Patricia Park’s debut novel, Re Jane, is a fresh, contemporary retelling of Charlotte Brontë's Jane Eyre that takes its Korean-American heroine, Jane Re, on a journey from Queens to Brooklyn to Seoul—and back.

Patricia was born and raised in Queens and is a graduate of Bronx High School of Science and Swarthmore College. She earned an M.F.A. in Fiction from Boston University and is a former Fulbright Scholar and Emerging Writer Fellow at the Center for Fiction. Patricia has published essays in The New York Times, Slice Magazine, the Guardian and others and taught writing at Boston University, CUNY Queens College and Ewha Womans University in Seoul.

Patricia will join us at Queens Library at Flushing on Wednesday, August 19 to discuss her novel—and we’re very pleased that she answered some questions for us in advance of her talk!

You grew up in the Korean community in Flushing, Queens. What role did Queens Library play in your life?
Thanks to Queens Library, I was always kept up-to-date with my childhood favorites: Sweet Valley Twins and The Baby-Sitters Club series. I used to live down the block from the McGoldrick branch, and in high school I frequented the Flushing main branch.

Re Jane is a modern, Korean-American retelling of Jane Eyre. How did you come up with such an interesting idea for your first novel?
I loved the idea of taking a classic I’d loved since age 12 but setting it in the worlds I knew: Korean-American Flushing, gentrifying Astoria and the blue-collar outer boroughs. I guess my timing's right because retellings seem to be all the rage!

How much of your own upbringing and experiences did you draw on for Re Jane?
Background-wise, Jane and I both grew up in Queens and witnessed the cultural clashes between Manhattan and the (less glamorous) outer boroughs, as well as the Korean immigrant community vs. mainstream America. Personality-wise: Jane and I are very different people!

Jane Eyre deals with many themes, especially trying to find a place where you belong. How does your novel tackle those themes and also connect them to the immigrant experience?
Questions of identity and belonging are huge themes in Re Jane. Ultimately, I wanted to challenge questions like, "Where are you really from?"

What are you working on now?
I'm writing about the Korean community in Buenos Aires, Argentina, inspired by my family’s experiences there.

What advice do you have for aspiring writers and people trying to finish their first novel?
Keep at it. Re Jane took me about a decade to finish!

Patricia Park’s debut novel, Re Jane, is a fresh, contemporary…