How the Roller Coaster Came to Queens 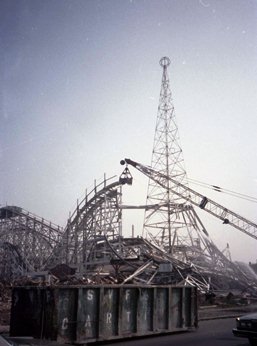 January 20 marks the 127th anniversary of the patenting of the roller coaster. These scream-inducing attractions have spread all over the world and endured their own peaks and troughs of popularity, but you can’t tell the story without talking about Queens, where a pioneer of the craft brought his final designs.

LaMarcus Adna Thompson filed the original roller coaster patent in 1885. At that point he had already built a “scenic railway” attraction at Coney Island in 1884, consisting of two towers and a dip in the middle.

He based the design on gravity railways such as the Mauch Chunk Rail Road in Pennsylvania, which ferried coal from a company mine to its chutes on the Lehigh River, relying on gravity to propel the carriages along the track. Mules were required to tow the carriages 9 miles back up to the mine and then ride the trains back downhill, sharing the twists, turns and scenic thrills with their drivers.

Thompson’s Coney Island ride was a hit. It touched off a roller coaster arms race of sorts. Among the advancements was the “Drop the Dip,” which burned to the ground in 1907, was rebuilt, and came to be regarded by some as the first modern “high-speed” coaster. The Coney Island coaster that remains, the legendary Cyclone, was built in 1927 on the site of Thompson’s first scenic railway. It’s one of the few wooden roller coasters still in operation, though several replicas pay homage to it around the world.

Thompson wound up taking his big ideas to Queens, where his efforts paved the way for the lost, lamented Rockaways’ Playland. In 1901, Thompson had built a new scenic railway at the Pan-American Exposition in Buffalo. But his business prospects were dashed when President William McKinley was assassinated there. According to Richard Geist, whose family ran Playland for decades, Thompson was enticed to bring the entire elevated railway to an existing amusement park at Far Rockaway. It became known as the L.A. Thompson Amusement Park. A picture in our Archives depicts one of the scenic railways constructed at the location, its support beams appearing to plunge straight into the surf.

The park soldiered on until 1928, two years after the amusement impresario died. At that point the park was sold to the Geist family, who changed the name to Rockaways’ Playland and commenced several decades of financially tenuous operation. Their Atom Smasher coaster was built in 1939 to coincide with the roller coaster on the midway at the World’s Fair in Flushing Meadows Corona Park. It was a central attraction for years, appearing in the 1952 film Cinerama. After Playland closed for good in 1985, the old roller coaster was the centerpiece of the dramatic dismantlement process, as seen above in our Archive photo, making way for condominiums.

Roller coasters had it rough throughout the country in the mid-20th century. Queens was home to other amusement parks that have since vanished from the landscape, like Fairyland, which closed in 1968 to make way for the Queens Center Mall, and Adventurer’s Inn, which was roughly where the New York Times printing plant is now on the Whitestone Expressway — and was condemned by the city in 1973.
Most of the coasters on Coney Island were also razed to make way for development.  But The Cyclone lives on, a relic of the heady era Thompson ushered in, and proof that the twists, turns, and rapid plunges of a well-constructed coaster offer thrills that never get old.

Want to learn more about Coney Island? Check out this documentary.

How the Roller Coaster Came to Queens

January 20 marks the 127th anniversary of the patenting of the…