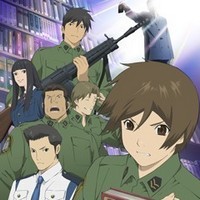 What would you do to defend your right to read? Library War is a fun manga series from 2007 that responds to that question with action, comedy, romance, and an amazing cast of characters that are sure to become close to any reader's heart. Based on the novel series Toshokan Sensou and adapted into a TV series, Library War is set in a future where the Japanese government is cracking down on the media. With all political solutions exhausted, the libraries decide to militarize and fight back against this imposed censorship.

The story follows Iku Kasahara as she works to become the first female Task Force member of the Library Defense Force. While she was in High school, government soldiers came into the book store she was shopping at to enforce a recently released banning list. The book she was holding and about to purchase was on their list of books and she refused to give it up, even as the soldier tried to tear it from her hands. Saved by a member of the Library Task Force, her nameless "prince" becomes her own noble goal to help protect the readers of Japan. The Task Force members not only act as librarians as we know them, but are the library's main defenders and field operatives.

The strength of this series comes from the cast: the naive and energetic Kasahara, the other newbie and more stoic Hikaru Tezuka, the gruff drill sergeant Atsushi Dojo, Kasahara's roommate, the more information minded Asako Shibasaki and jovial branch Captain Ryusuke Genda are all characters that are given time to shine, even in their shorter screen time. Each of them are well fleshed characters, not only by their actions, but also their beliefs about what libraries should stand for. These aren't just people you’d want fighting for your right to read, but people you’d love to see working at your local library as normal staff as well.

Another notable thing about this series is the lack of a concrete villain. There is of course the Media Betterment Act and Committee and their own militarized force, but very few of them are portrayed as outright anti-library. The story takes care to show that the enemy is the policy, and not the people tasked with enforcing it.

The manga itself has more of a focus on the romantic side of the plotline, and a slightly bigger bend towards comedy. Sadly, the TV series and the original novels themselves haven't been officially brought to America yet, but look for future blog posts for information on when this incredible series brings them over. If you see this series in your library, be sure to give the first volume a read. You won't regret it!

What would you do to defend your right to read? Library War is a…