I Don't Care About Your Band 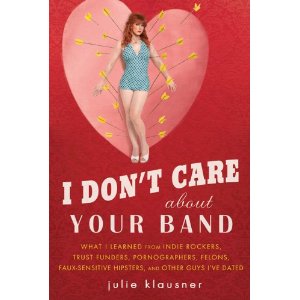 Memoirists can pick and choose the stories they tell, and while some have been known to outright lie or embellish (i.e. James Frey or Augustan Burroughs), Julie Klausner in her memoir, I Don't Care about Your Band: What I Learned from Indie Rockers, Trust Funders, Pornographers, Felons, Faux Sensitive Hipsters, and Other Guys I've Dated, is more open and honest about experiences that were painful and embarrassing than one might think she should be.Klausner, a comedy writer and performer, recounts her quest for love in New York City and many of the details she divulges are often hilarious and at times excruciating. She describes how after her first sexual experiences in high school she felt that the boys involved were doing her a favor. In her twenties she learns that ”when a guy dates you for three months and you still can’t call him your boyfriend, it’s time to figure out why it is you’re still hooking up with him.”In the process, she learns to stay away from people who are not able to meet her needs. Klausner’s sense of humor may seem a bit off-color at times and this book may not be for everyone, but women in their twenties and thirties, and particularly women who’ve dated in New York City, might “relate to the sad stuff that’s funny” and “marvel at the stories they’re grateful to experience only from the safe distance of a spectator.”

I Don't Care About Your Band

Memoirists can pick and choose the stories they tell, and while…