Literary Thursdays: The Atlas of Disappearing Places: Our Coasts and Oceans in the Climate Crisis 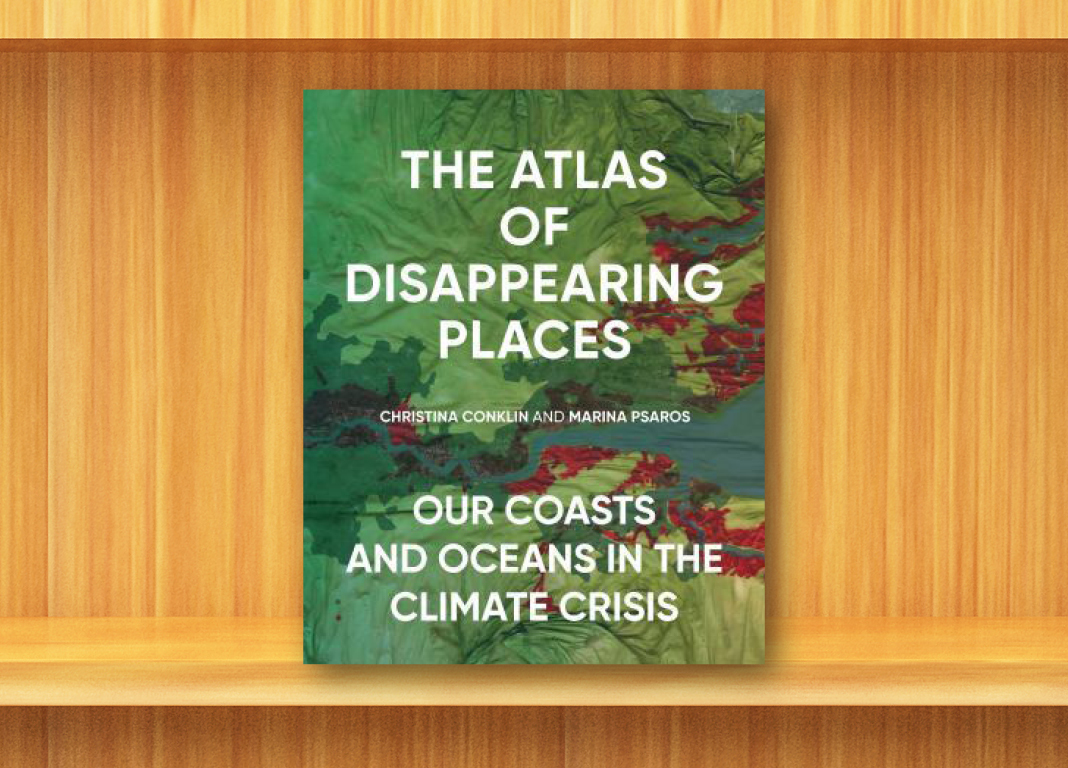 On August 12, Literary Thursdays welcomed artist and author Christina Conklin to share her new book, The Atlas of Disappearing Places: Our Coasts and Oceans in the Climate Crisis. Conklin, a textile artist, is interested in the intersection of natural systems with belief systems. She approaches her art by asking herself what nature is already making. She began working on the book in 2016, with the goal of helping people to see the ocean as the central circulatory system of our planet and to see ourselves as part of it.

The book covers changing chemistry, strengthening storms, warming waters, and rising seas – in that order, to reflect the order in which these changes are occurring in nature. Conklin explores the ocean as body, with health/illness parallels, and presents future histories – imagined and researched ideas of what might happen in each of the twenty locations in the book in the future. She writes from 2050; for example, she predicts the outcome of a future super storm in New York City.

In her talk, Conklin introduced the idea of transilience, a geology term referring to an abrupt change in layers of rock. Unlike resilience, which she describes as a bouncing back, Conklin says we need abrupt jumps forward in order to address the climate crisis. Such jumps, she argued, are necessary more than incremental changes.

She created all of the book’s maps on dried seaweed that she collects near her home in California’s Half Moon Bay. She sees a certain poetry in the fact that the seaweed liquefies if wet. Her maps depict, among other places and things, ice sheets, coastal cities, ocean warming, global plastic waste pollution, the Pacific garbage patch, and the area in Vietnam where most of that country’s food supply is grown, a place that she says saltwater will inundate in the future. We must learn, she said, to relocate people in a safe and equitable way.

When discussing her global plastic waste pollution map, Conklin expressed the concern that fossil fuel industries are relying on us to depend on plastics more as our use of fossil fuels decreases.

When sharing a map of San Francisco, she explained that many cities have filled in their shorelines. Between the 1950s and 1980s, San Francisco filled in its bay by one-third. She described the problem that many toxic chemicals lay underneath the land that was filled in and will be exposed by rising sea levels.

Looking at a map of London, Conklin expressed that the flooding that will come from the Thames River presents existential questions to which she thinks the solution is moving to higher ground, while this is difficult to come to terms with. She encourages visiting climatecentral.org to use their surging seas tool to find out about flood assessments in your area.

In New York City, not much changed in terms of preparations for protecting vulnerable populations as a result of Hurricane Sandy, she says. In the future, a storm of this size will become more common. We need to have hard conversations now or face disasters, Conklin warned.

Conklin’s ultimate message was one of urgency, as expressed in the title of her atlas. Asked the most interesting lesson she learned while putting the book together, she responded that it was how many people are devoting all of their time to the climate crisis. She indicated that these stories of hope encouraged her because cultures shift when enough people take a step in understanding an issue. We’re in a dead heat with climate change, she expressed, but she has faith we will win.

The Atlas of Disappearing Place: Our Coasts and Oceans in the Climate Crisis is available from Queens Public Library. Read an excerpt here.