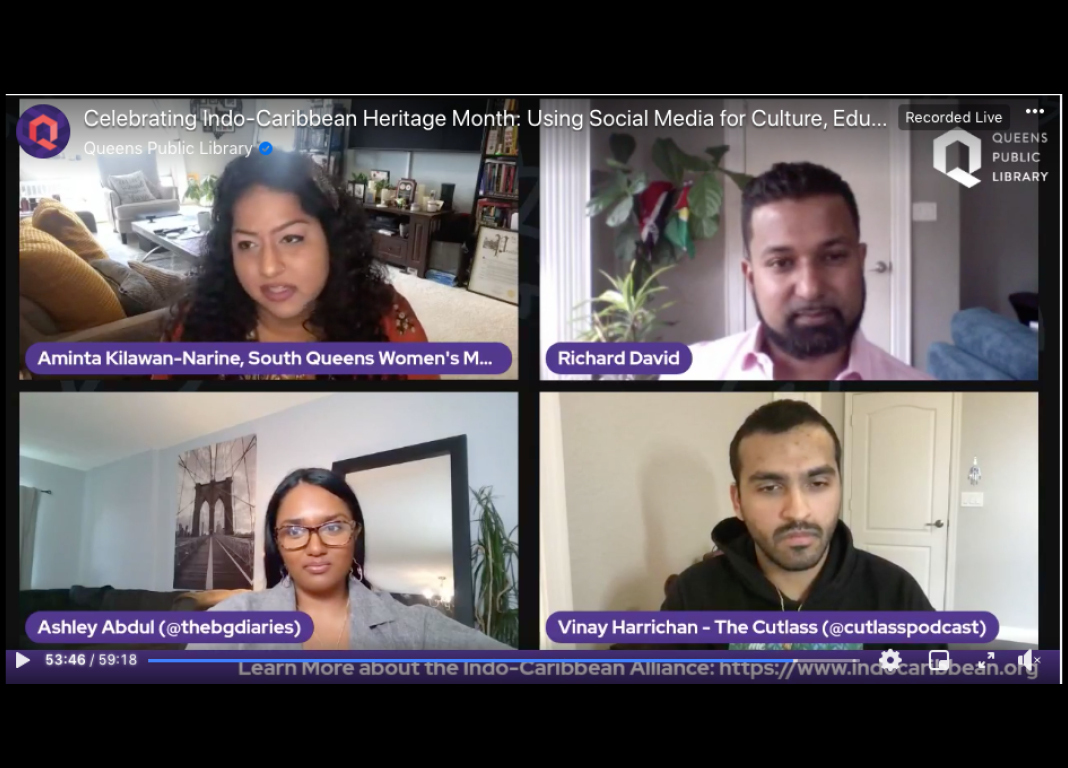 On Friday, May 7, the Indo-Caribbean Alliance presented a program on Celebrating Indo-Caribbean Heritage Month: Using Social Media for Culture, Education & Mobilization. Moderated by Richard David, the program featured presentations by Vinay Harrichan of The Cutlass, Ashley Abdul of Brown Girl Diary, and Aminta Kilawan Narine of South Queens Women’s March, as well as a performance of Shiva Shiva by Davina Singh to music by the Gundecha Brothers.

David explained that Indian Arrival Day takes place on several days in May across the Caribbean, in places such as Grenada, Guyana, Trinidad, and Suriname, commemorating the 1838 arrival of Indian indentured servants in the region. Vinay Harrichan, founder and curator of The Cutlass, a social media platform, discussed doing a deep dive into history that is not taught, sharing culture, history, religion, identity, cuisine, clothing, music, and language. He is bringing history to people for the first time and sharing resources that they would not otherwise have access to at no cost. Ashley Abdul is presenting history for a new generation on Brown Girl Diary, which now has 10,000 followers, compared with 900 before the pandemic. While Ashley is based in Canada, fifty percent of her following is in the United States. Ashley wants to present relevant information such as about the community’s involvement in business and what’s happening in Trinidad with gender-based violence, and to provide toolkits to inform and promote action. While she would like to add on-the-ground actions to her social media action, Toronto is currently on lockdown due to the coronavirus. Aminta Kilawan Narine draws inspiration from women’s rights movements to lead the South Queens Women’s March, which promoted the Census and has done street chalking against harassment in Little Guyana. Narine was involved in promoting Black Lives Matter and believes her Hindu faith is a tool for feminism.

The panel recommended the Indo-Caribbean collection at Lefferts Library as an excellent resource for people of Indo-Caribbean descent to access their own heritage. New York City has the largest Indo-Caribbean community outside of the Caribbean and the work of all three panelists as well as the moderator is to fight erasure after 183 years in the Western Hemisphere.

Watch the program here. On Friday, May 14 at 2pm, join us for a second Indo-Caribbean Heritage Month program on Music as Resilience featuring The East Indian Music Academy, 1 Taal Tassa Academy, and Eddie Arjun. Watch live on our Facebook page, https://www.facebook.com/QPLNYC.