Spotlight on New Book Releases for May and June 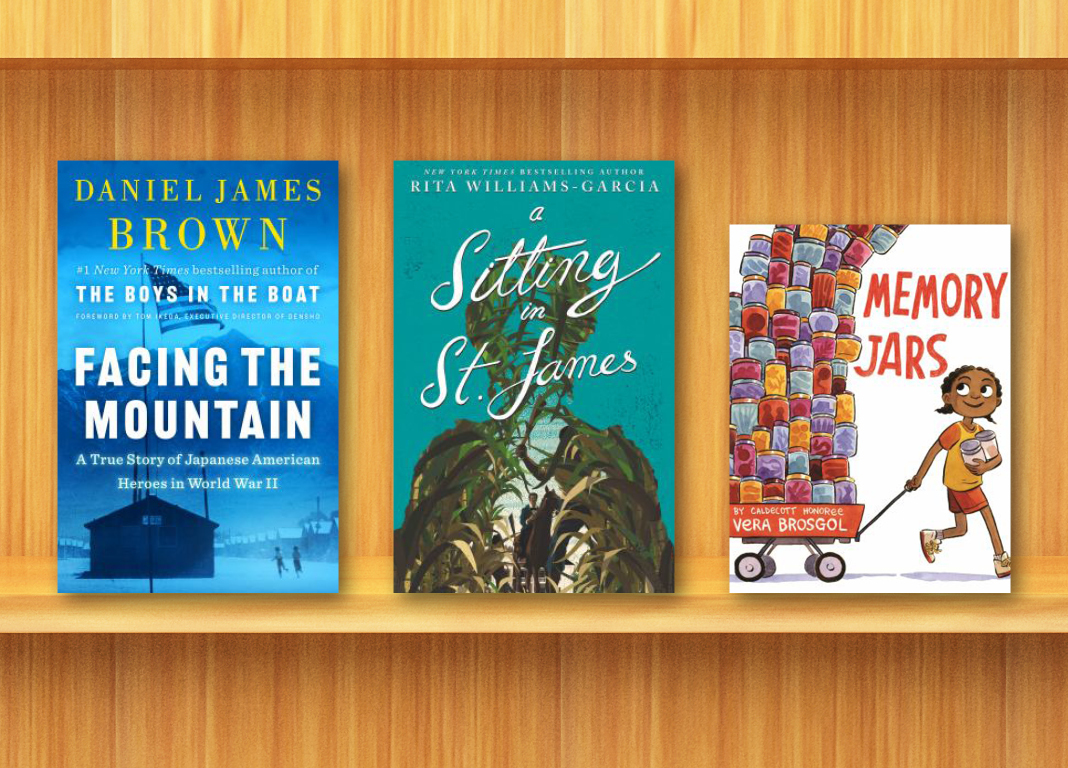 Spotlight on New Books for May/June
We have more new books and these are just a few of them! Enjoy historical novels, nonfiction celebrating Japanese Americans, diverse picture books, and books for teens. Check out our spotlight on books for Pride Month.

May 4, 2021
Great Circle (adult)
by Maggie Shipstead
Starred by BookPage, Library Journal, Kirkus, and Publishers Weekly, this is a thoroughly researched novel about a female aviator and the actress who plays her in a Hollywood movie a century later.

May 4, 2021
Hurricane Summer (YA)
by Asha Bromfield
Starred by Booklist and School Library Journal, this novel follows a Jamaican Canadian teen as she travels to Jamaica to visit her father just as a storm settles over the island. The storm upends her relationships and forces her to choose what is important.

May 11, 2021
Facing the Mountain (adult)
by Daniel James Brown
Starred by Booklist and Publishers Weekly, this nonfiction account chronicles the experiences and adventures of Japanese American heroes of World War II.

May 18, 2021
Like a Dandelion (children)
by Huy Voun Lee
Starred by Kirkus, this children’s picture book uses the dandelion’s growth as a metaphor for the adjustment of immigrants to the United States, based on the author’s experiences coming to this country from Cambodia as a child.

May 18, 2021
Tokyo Ever After (YA)
by Emiko Jean
Starred by Booklist and School Library Journal, this is the story of a Japanese American teen who discovers her father is the Crown Prince of Japan and experiences all the life changes that result.

May 25, 2021
A Sitting in St. James (YA)
by Rita Williams-Garcia
Starred by Booklist, Horn Book, Kirkus, and School Library Journal, this masterpiece by the award-winning author explores life on an antebellum plantation in 1860 Louisiana.

May 25, 2021
Memory Jars (children)
by Vera Brosgol
Starred by Booklist, Publishers Weekly, and School Library Journal, this is the account of a young girl who tries to find a way to keep all of her favorite things, only to discover that some must be keep in her memory.

June 1, 2021
Sisters of the Neversea (children)
by Cynthia L. Smith
Starred by Booklist, Kirkus, and Publishers Weekly, this is a retelling of the Peter Pan classic with Native American Lily and English Wendy as stepsisters trying to cope with parents who aren’t getting along.

June 8, 2021
The Hidden Palace: A Novel of the Golem and the Jinni  (adult)
by Helene Wecker
Starred by Kirkus, this historical novel set in New York and the Middle East explores the beloved characters, a woman made of clay and a creature of fire, from Wecker’s previous novel The Golem and the Jinni.

June 15, 2021
The Maidens (adult)
by Alex Michaelides
Starred by Booklist and Publishers Weekly, this novel centers on a therapist who investigates a women’s secret society at Cambridge University that seems to be connected to multiple murders.

The Guncle (adult)
by Steven Rowley
This humorous novel follows the adventures of a gay former sitcom star who unexpectedly becomes the caretaker for his niece and nephew.

May 25, 2021
Pumpkin (Dumplin’)  (YA)
by Julie Murphy
An openly gay teen in West Texas makes an audition tape for a drag show and ends up being nominated for prom queen.