All about Treason with Carlton F.W. Larson 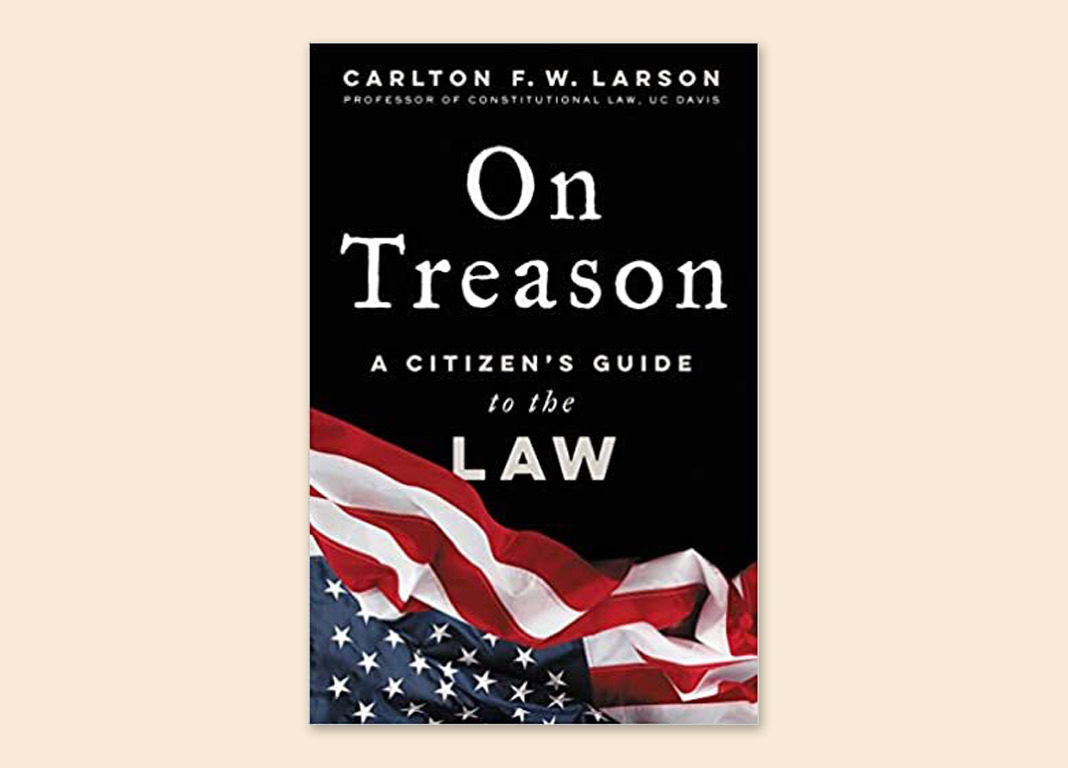 Every Thursday, the library hosts an author for its Literary Thursdays program. On November 5, our guest was Carlton F.W. Larson, Martin Luther King, Jr. Professor of Law at the University of California, Davis, School of Law and leading treason scholar. Larson’s new book, On Treason: A Citizen’s Guide to the Law, explains the subject of treason to the layperson. Larson commented that treason has become part of the national conversation in the past few years with some accusing President Trump of it and with President Trump accusing James Comey, Barack Obama, and Joe Biden of it. In this unique historical moment, Larson heard a lot of talk about the subject he studies and saw the opportunity to inform the public about it. His book is structured as alternating chapters of law and history.

Treason is defined in the United States Constitution, Article 3, Section 3, and is remarkably narrow. It is the only crime defined by the Constitution. According to the Constitution, treason is the act of levying war against the United States or providing aid and comfort to the enemies of the United States. It can only be proven by two witnesses to the same overt act or confession in open court. These parameters mean that, despite what some may think, the alleged act of working with or for Russia would not constitute treason. Furthermore, many modern acts that one might think of as treason that take place as a person using a computer are not easily proven as treason due to lack of witnesses. Larson explained that the American definition of treason comes from the 1351 English statute of treason that sought to limit its definition. At the time, treason was linked with inheritance of land. Anyone who was guilty of a felony surrendered their land to the next lord, but anyone guilty of treason forfeited their land to the king. Thus, the parliament wanted to define the crime as narrowly as possible to prevent such forfeiture. In that era, there was also high and petty treason, with high treason being an offense against the state and petty treason being a crime such as a wife or servant killing a master.

The framers of the Constitution did not want political dissent to be an offense of treason. Hence, their desire was to have a restrictive definition. However, Larson explained that the Supreme Court has opined that while the treason clause seems clear and simple superficially, it is packed with controversy.  Levying war against the United States – for example, an army during the Civil War – must be an attempt to overthrow the government overall, not to change a law. The clause probably intended that a group levy war, not an individual. But, as Larson pointed out, we now have technology that makes it possible for individuals to levy war against the state – for example, an individual with a suitcase containing a nuclear weapon. As for giving aid and comfort to enemies, Larson gave another hypothetical example. Imagine a Secretary of Defense gave nuclear secrets to China and China paid him for them. This would not be treason because aiding foreign countries is not treason – only aiding enemies that we are in a state of war with can be considered. Larson named Al Qaeda, the Taliban, and ISIL as possible enemies that we would be considered in a state of war with for the purposes of the treason clause. Yet, other disloyalty laws could apply to a Secretary of Defense’s actions – for example, espionage. He provided the example of the Rosenbergs, who were not tried for treason because we were not in a state of open war with the Soviet Union. Rather, they were convicted of conspiracy to commit espionage.

There is also the crime of treason against a state government, if one tries to overthrow it. John Brown, who invaded Virginia, is the only person to have been executed for the crime of treason against a state government. Larson also shared the story of the Mine Wars in the 1920s, the largest insurrection since the Civil War, when 8000 miners marched to save fellow miners who were imprisoned during a coal strike. As a counter force, 3000 men and aircraft were sent. There was an attempt to prosecute the leaders of the miners for treason against the state of West Virginia. He gave the example of the recent plot to kidnap the governor of Michigan as a crime that could potentially be charged as treason against the state of Michigan.

Larson’s presentation showed how complex the law of treason is, despite its short length in the Constitution. It also demonstrated why this crime is so rare, despite how much it may have been discussed recently.

On Treason: A Citizen's Guide to the Law is available in both eBook and print book format from Queens Public Library.