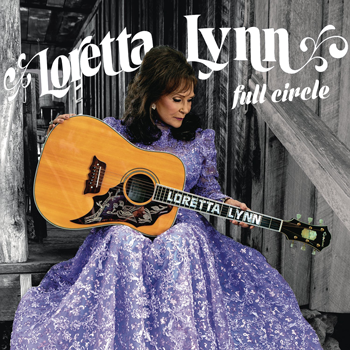 Check out our music recommendations for April 2016!

Loretta Lynn, Full Circle
You probably know Loretta Lynn best as the “coal miner’s daughter.” She’s been recording country music for 60 years now and Full Circle is her 40th album to make the Billboard Country Top 10. As the title suggests, Lynn revisits some of her earliest songs while offering new ones and even singing duets with Willie Nelson and Elvis Costello. She’s won more awards and honors than can easily be counted and Full Circle will certainly add some more. You can stream the whole album on Freegal.

Bill Frisell, When You Wish Upon a Star
Bill Frisell is one of America’s foremost guitarists. He is best known for jazz, but has also written and recorded folk, classical, and country music. His new album is a sentimental exploration about how the music we hear in movies and TV helps us to form a relationship with what we are watching. Songs from movie classics like Breakfast at Tiffany's and The Godfather are mixed with music from TV shows like Bonanza; they are all performed in Frisell’s unique style, but you’ll have no problem recognizing them. Hear it for yourself on Freegal.

Macklemore & Ryan Lewis, This Unruly Mess I’ve Made
Macklemore is a rapper from Seattle and Ryan Lewis is his producer. This Unruly Mess I’ve Made is the second album from their collaboration. Judging by the critics’ response, the album lives up to its title. Macklemore is ruffling a few feathers with his confrontational style, perhaps alienating him from the fans that preferred the more mainstream tracks from their previous CD The Heist. The first video from the album is for the song “Kevin” featuring Leon Bridges, and you can watch it here.

3 Doors Down, Us and the Night
3 Doors Down had a post-grunge pop hit in 2000 with “Kryptonite,” which has gone on to become their signature song. Since then, the band has released five albums and has had as many changes to their lineup. Still, they sell millions of records and sell out large venues, so the changes must have worked. Their latest CD doesn’t veer too far from their grunge-lite formula—why fix it if it isn’t broken? Watch the video for the song “In the Dark.”

Iggy Pop, Post Pop Depression
Iggy Pop is a living legend of the American punk scene. His band the Stooges were playing in the style that came to be known as punk 10 years before it got the name. His antics on stage and off are mythic. His solo career was practically mainstream by comparison, but he was always the wild man of rock. His latest CD hits on all of the usual themes of sex and death and shows that, despite his age, he isn’t going down without a fight. Listen to the first single, “Gardenia.”

BJ the Chicago Kid, In My Mind
Brian James Sledge, aka BJ the Chicago Kid, is a performer in the school of classic Chicago soul. He is soft spoken but not shy, and some of his songs could make teenagers blush. Tenderness toward women, not aggression, is the key and every one of the tracks on his debut In My Mind could pass as a love letter. He could best be compared to Smokey Robinson, but his tribute song to Marvin Gaye, “Turnin’ Me Up,” is a clear hit. Watch the video for it here.

Bonnie Raitt, Dig in Deep
Bonnie Raitt is a blues and roots rock singer as well as an accomplished slide guitar player. She struggled in her career until her commercial break-out in the early 1990s, most memorably for the song “Something to Talk About.” She’s been a staple of NPR and commercial radio ever since. Her 17th studio album, Dig in Deep, continues her streak of Top 40 hits. Listen to her funky cover of the INXS hit “Need You Tonight.”

Wolfmother, Victorious
Wolfmother is an Australian hard rock band that has been compared to Led Zeppelin and Black Sabbath. They’ve been recording and touring for ten years, but have yet to see any mainstream success outside of Australia. They would certainly appeal to American fans of psychedelic rock and heavy metal. Though some have complained that the new album Victorious is more like lead singer Andrew Stockdale’s solo project, the sound remains the same. Watch the video for the title track.

Jaheim, Struggle Love
Jaheim is an R&B singer and former rapper from New Jersey who has been recording since 2000. He had an early hit with the song “Put That Woman First” and his album Ghetto Classics went straight to number one in 2006. Ten years later, Jaheim has changed labels and gone a bit old school with his new album, Struggle Love. The title refers to his nostalgia for the days before fame, when everything was a struggle. There are horns, handclaps, and harmonies galore to get you in the mood. Listen to the title track.

Newsboys, Love Riot
Newsboys are a contemporary Christian pop band from Australia that has been on the scene since 1985. Like Menudo, they have changed personnel often and had 3 different lead singers, but never changed the name of the group. No matter—the fans still flock to the shows and their records make the charts and win awards. They’ve even won a new generation of fans for their work with the Veggie Tales video series. Their 18th album is Love Riot, and you can stream it on Freegal.