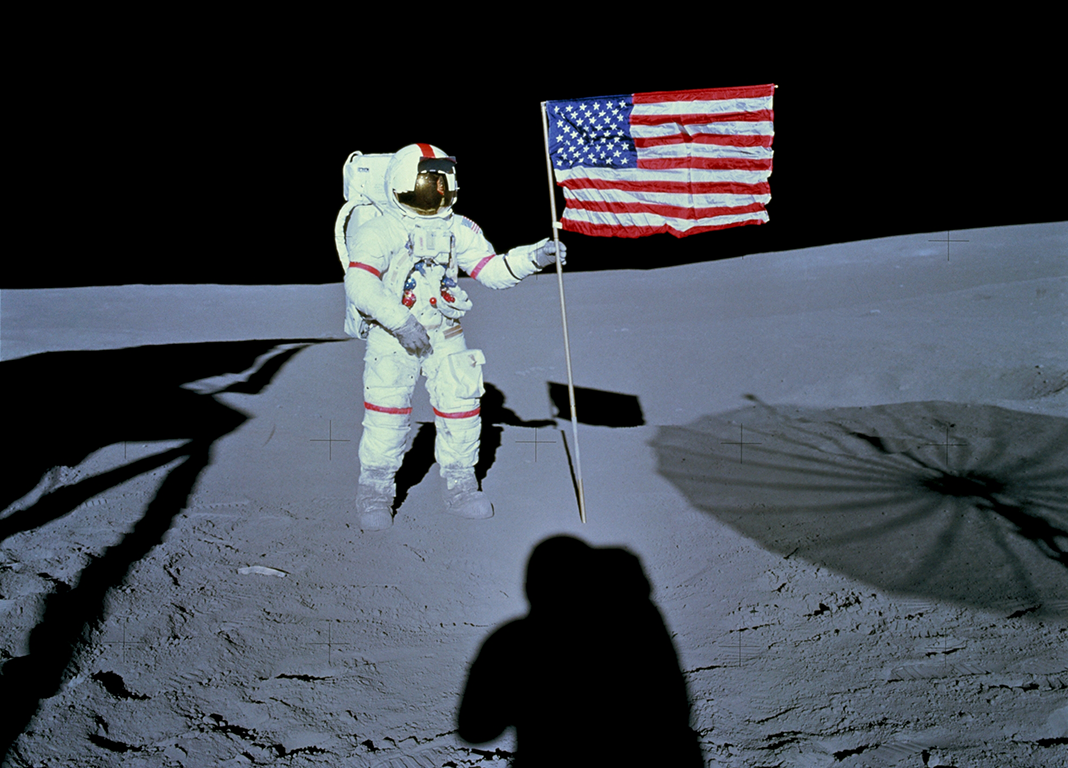 Apollo 14, which launched on Sunday, January 31, 1971, was the eighth crewed mission in the United States Apollo program, the third to land on the Moon, and the first to land on the lunar highlands.

To learn more about Apollo 14, join us for our special programs exploring the mission and celebrating its 50th anniversary!

Pictured: Alan Shepard and the American flag on the Moon during the Apollo 14 mission, February 1971, taken by his fellow astronaut Edgar Mitchell.

Apollo 14: Why Did It Happen?
Monday, February 1, 4pm
The U.S. spent nearly a quarter of a trillion dollars—why? Casey Dreier of The Planetary Society takes a historical look into the roots of Apollo, including details of the Apollo 14 mission, and will reveal the agendas and global currents responsible for this unprecedented mission of exploration, which happened a mere nine years after the first human was ever launched into space. Join here: https://queenslib.org/396Piml

The Science of Apollo 14
Tuesday, February 2, 4pm
When Apollo astronauts visited the moon, they left more than footprints; they built a science station to continue to collect data even when the astronauts returned to Earth. Marie Henderson discusses the search for lost lunar data in garages, the astronaut smokejumper that carried tree seeds around the Moon, and the importance of the Apollo missions and modern lunar science. Join here: https://queenslib.org/36kUDV5

Apollo 14: Rockets
Wednesday, February 3, 3:15pm
In this session, we will explore rockets to tie-in with the anniversary of Apollo 14. Bring paper, balloon, straws, pen, scissors, and tape. Join us at https://queenslib.org/3oaFBYS

Apollo 14: Could Humans Return to the Moon by the End of the Decade?
Thursday, February 4, 2pm
NASA is currently working with private companies to extend human presence beyond Earth orbit for the first time in a half-century. Casey Dreier of The Planetary Society will present an overview of Project Artemis—named after the twin sister of Apollo—and how it incorporates partners like SpaceX into the goal of sustained, permanent human presence on our closest celestial neighbor. Join here: https://queenslib.org/2YcMzkG

Apollo 14: "Moonshot" with Ms. Ashley
Thursday, February 4, 5pm
Join Ms. Ashley for a read-aloud of "Moonshot: The Flight of Apollo 11" by Brian Floca to learn about the first spaceflight that landed humans on the moon! You might know who was the first man on the moon, but do you know anything else about that historic space trip and its influence on later space trips? Tune in to find out, and stay afterwards for a STEM project on how to create your very own “moon sand” using baby oil and flour! Watch live on our Facebook page.

Apollo 14: Zoom to the Moon Story & Craft
Friday, February 5, 3:15pm
Families with children ages 4-7, join Ms. Jeanne, Youth Services Manager of Flushing Library, as we celebrate the mission of Apollo 14 with a story & craft! Bring paper, crayons, and scissors. Join us at https://queenslib.org/2LcvcNZ

Apollo 14: Bingo Baker
Friday, February 12, 12pm
Come and join us for a virtual game of bingo in honor of Apollo 14. Join here: https://queenslib.org/2MubGgv