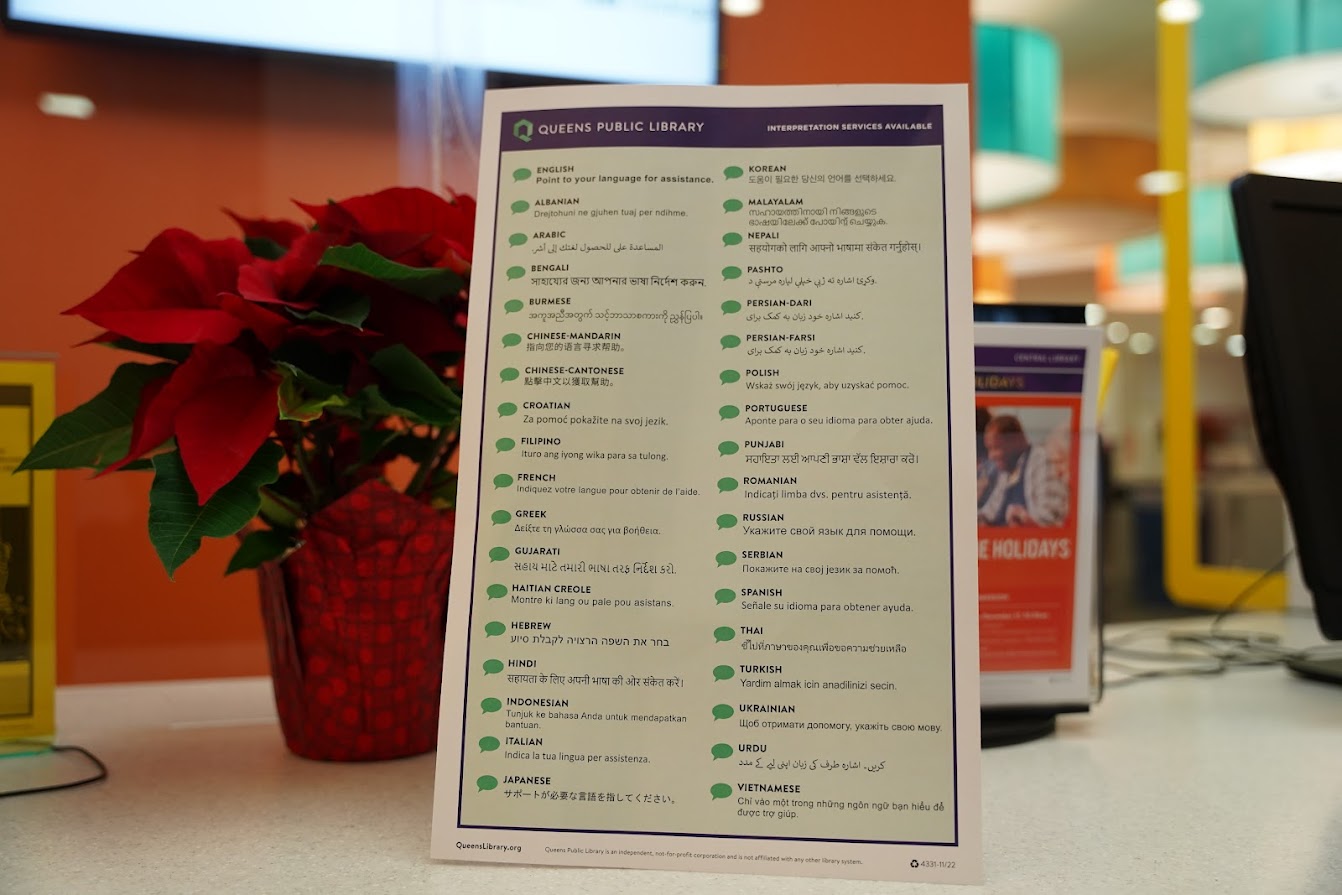 Queens, NY_Queens Public Library today announced that every branch now offers live phone interpreting services in more than 240 languages, ensuring greater access to its collections, programs and services in the most ethnically and culturally diverse area in the country.

According to the 2020 Census, half of the population of Queens was born outside of the U.S. and more than 28 percent of the borough’s population have limited English proficiency. Those residents often need additional assistance the most, as they try to build a new life in the U.S. while navigating the complex systems of housing, education, healthcare, employment, and more.

At each QPL location, a reference or circulation desk is now equipped with a phone that has two handsets. After identifying their language from a chart, customers can have a three-way communication with a library staff and an interpreter.

In the four months since Queens Public Library first began testing the LanguageLine service, QPL librarians at numerous locations across the borough, from Central and Flushing to Poppenhusen, Queensboro Hill and South Ozone Park, were able to assist customers speaking Spanish, Mandarin, Cantonese, French, Arabic, Pashto, Russian and Urdu, among other languages.

“Offering live, on-demand interpretation services by phone in one of the most linguistically diverse areas in the world builds on our longstanding commitment to serving all New Yorkers, whatever languages they speak,” said Queens Public Library President and CEO Dennis M. Walcott. “Our goal is to ensure that every person coming through our doors receives the assistance they need to be successful in their lives, and the introduction of LanguageLine, with interpretation in more than 240 languages, removes a significant barrier.”

In 2019, when Queens Public Library launched its “Renewed Promise to the Public,” a long-term initiative to honor and serve the diversity of our customers and communities, we also adopted a new tagline – “We Speak Your Language.” While taken figuratively, it means that we understand our customers, are here for them, and will help them get where they want to go, whatever their interests, needs, or circumstances, taken literally, the tagline means that we aspire to speak the many native languages of Queens residents.

At that time, in order to help bridge the language gap and provide our immigrant customers with high quality service, all QPL locations received tablets dedicated to Google Translate so staff could have conversations in multiple languages with customers. The Library also introduced Travis translation devices at every site, which can translate speech into another language and speak it back.

In 2020, the Library had been planning to introduce access to LanguageLine, a new service offering telephone interpretation via an 800 number, especially useful for lesser-known languages. But the pandemic put a two-year pause on the rollout.

“Residents of Queens speak over 190 languages and with the introduction of LanguageLine at all of our locations, our customers can now receive assistance in their preferred language with just a phone call from a staff member to a live interpreter,” said Fred Gitner, Assistant Director of New Initiatives & Partnership Liaison at the QPL’s New Americans Program, which coordinates the Library’s many multilingual programs and immigrant services. “Now, we can truly say that at Queens Public Library, we speak your language!”

The Library’s IT team is also in the process of installing an upgrade to the QPL mobile app that translates its content into 96 languages through a dropdown menu, allowing people greater access to our resources when they are on the go. This new feature is currently available in Android and will soon be available in iOS as well.

Queens Public Library (QPL) transforms lives by cultivating personal and intellectual growth and by building strong communities. It is one of the largest and busiest public library systems in the United States, dedicated to serving the most ethnically and culturally diverse area in the country.

An independent, non-profit organization founded in 1896, Queens Public Library offers free access to a collection of more than 5.4 million books and other materials in 200 languages, technology, and digital resources. Prior to the pandemic, the Library hosted more than 87,500 educational, cultural, and civic programs annually and welcomed 11.4 million visitors through its doors.