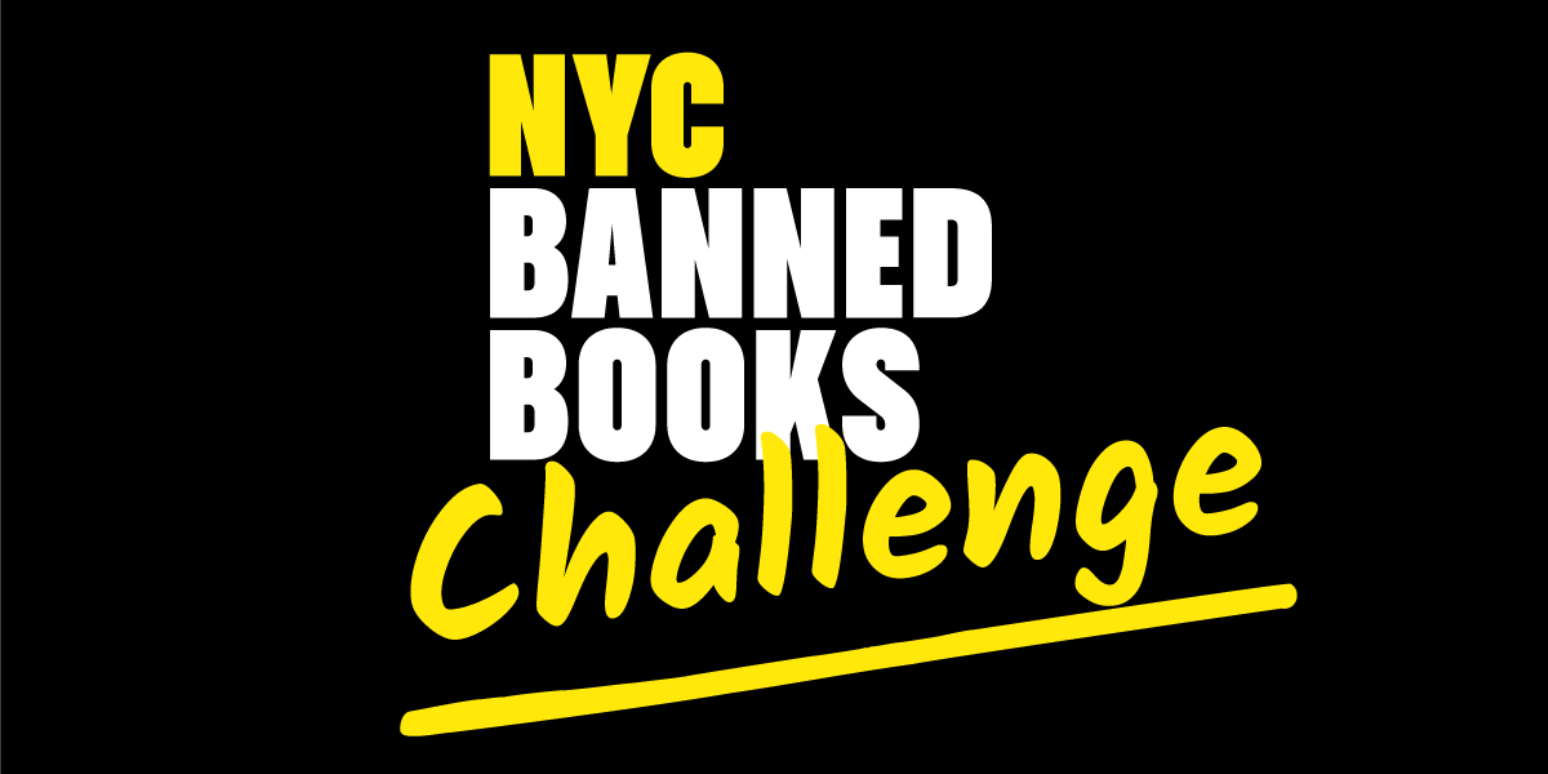 To get the city started, the libraries are offering unlimited digital copies of National Book Award winner Last Night at the Telegraph Club by Malinda Lo through June 26; additional physical copies of the book will be available systemwide.

MAY 23, 2022—The City’s three public library systems are taking a stand against censorship with a new Banned Books Challenge: 10 banned or challenged books that expert librarians recommend New Yorkers borrow and read.

To get the city started, Brooklyn Public Library, The New York Public Library (which serves the Bronx, Manhattan, and Staten Island), and Queens Public Library are making one of the recommended books—popular YA title and 2021 National Book Award winner Last Night at the Telegraph Club by Malinda Lo—available with no waits via their free e-reader apps through June 26.

Additional physical copies of the book—featured on The New York Public Library’s Best Books for Teens of 2021 list—will also be available systemwide; some branches will also host book club discussions about the book specifically targeted at teens (as many banned and challenged books are YA titles, and teens have been particularly impacted by the isolation of the pandemic).

The Banned Books Challenge is being launched as a statement against the growing national trend of book bans. The American Library Association (ALA) recently announced that it tracked an “unprecedented” number of challenges to library, school, and university materials in 2021: 729 challenges to 1,597 individual books. This is more than double the challenges tracked in 2019. The books being challenged often focus on race, LGBTQ+ issues, religion, and history.

Last Night at the Telegraph Club—a Penguin Random House title that explores issues of race and sexuality—has been the subject of such book banning efforts, including in Texas earlier this year. The story focuses on Lily Hu, a teenager living in 1950s Chinatown, who falls in love with another woman in an environment not friendly to LGBTQ relationships. Her romance, along with red-scare paranoia, create a high-stakes situation that could cost Lily’s father his citizenship.

When the title won the National Book Award in 2021, author Malinda Lo referenced “opposition to our stories” in an emotional acceptance speech, highlighting the “pressure to remove books about people of color, LGBTQ people, and especially transgender people from classrooms and libraries. I urge every one of you watching to educate yourselves . . . we need your support to keep our stories on the shelves. Don’t let them erase us."

The Banned Books Challenge is an effort to do just that: to make a statement against censorship and organized efforts to erase identities, and to connect New Yorkers with a book that they will not only enjoy, but can help develop understanding and empathy— the tools needed to fight ignorance and hate. Running from May 23 to June 26, the challenge launches during Asian American and Pacific Islander Heritage Month and on the eve of LGBTQ Pride Month, contributing to robust efforts at all three library systems to celebrate and honor those who identify as part of those groups.

It is also worth noting that The New York Public Library’s Chatham Square branch previously did a program around the title earlier in 2022, partnering with the San Francisco Public Library and the New York City Department of Education to do a coast-to-coast Chinatown book club around Last Night at the Telegraph Club. About 150 eighth graders in two New York City schools in Chinatown read and discussed the book along with organizing librarians, and then had a virtual discussion with their counterpart students in San Francisco and author Malinda Lo.

“Open access to books and information is the core mission of Brooklyn Public Library and an essential component for a thriving democracy. Reading encourages critical thinking, introduces us to diverse viewpoints and perhaps mostly importantly, helps young people learn to respect one another and themselves. So we are especially delighted to launch the NYC Banned Book Challenge with the award-winning title Last Night at the Telegraph Club, a poignant story about love and identity,” said Linda E. Johnson, President of The Brooklyn Public Library.

“The Library’s role is to make sure no perspective, no idea, no identity is erased,” said Anthony W. Marx, President of The New York Public Library. “To ensure free and open access to knowledge and information. Book bans are in direct conflict with that noble mission, and we cannot be silent. The Banned Books Challenge is just one way we can bring people together and shine a light on this issue. We hope as many New Yorkers as possible will participate, learn and understand each other, and then do what we all must do: exercise our freedom to read by exploring the library and reading as many books as possible. Learn. Grow. Be uncomfortable. Enjoy. That’s the best way to combat censorship, and the Library is here to support those efforts.”

"As the most democratic and open institutions in the country, public libraries are committed to deepening our understanding of ourselves and one another, and to opening minds to diverse points of view," said Queens Public Library President and CEO Dennis M. Walcott. "With this citywide effort, we hope to encourage New Yorkers to exercise their freedom to grow, learn and discover by reading these books and to take a stand against censorship."

The Banned Books Challenge is just the latest way the City’s public libraries have stood up to book banning, an effort in direct conflict with their mission to ensure free and open access to knowledge and information.

Last month, Brooklyn Public Library, for example, launched Books Unbanned, an initiative to provide young adults across the country access to Brooklyn’s entire digital catalog (including dozens of frequently banned and challenged titles) via a special e-card. Over 3500 library cards have been issued after the first month of the campaign. In addition, members of BPL’s newly formed Teen Intellectual Freedom Council are creating peer support channels to advocate for the freedom to read.

The New York Public Library—which serves the Bronx, Manhattan, and Staten Island—launched Books For All, a partnership with publishers Hachette Book Group, Macmillan Publishers, and Scholastic to give anyone in the country access to four commonly banned titles with no waits via NYPL’s e-reader app SimplyE. The project runs through the end of May; through April, Books for All generated 22,000 new SimplyE users, nearly 10,000 checkouts of the four titles, and record web traffic to NYPL’s catalog—with 13% of traffic and usage coming from Florida, Pennsylvania, and Texas, where high-profile bans have taken place.

And for Pride Month in June, Queens Public Library will make an additional 10 LGBTQ-themed challenged or banned titles “always available” in digital format. These books will be announced soon.

About Brooklyn Public Library
Brooklyn Public Library is one of the nation’s largest library systems and among New York City’s most democratic institutions. As a leader in developing modern 21st century libraries, we provide resources to support personal advancement, foster civic literacy, and strengthen the fabric of community among the more than 2.6 million individuals who call Brooklyn home. We provide nearly 65,000 free programs a year with writers, thinkers, artists, and educators—from around the corner and around the world. And we give patrons millions of opportunities to enjoy one of life’s greatest satisfactions: the joy of a good book.

About Queens Public Library
Queens Public Library is one of the largest and busiest public library systems in the United States, dedicated to serving the most ethnically and culturally diverse area in the country. An independent, non-profit organization founded in 1896, Queens Public Library offers free access to a collection of more than 5 million books and other materials in multiple languages, technology and digital resources, and more than 87,500 educational, cultural, and civic programs a year. It consists of 66 locations, including branch libraries, a Central Library, seven adult learning centers, a technology lab, and two teen centers.