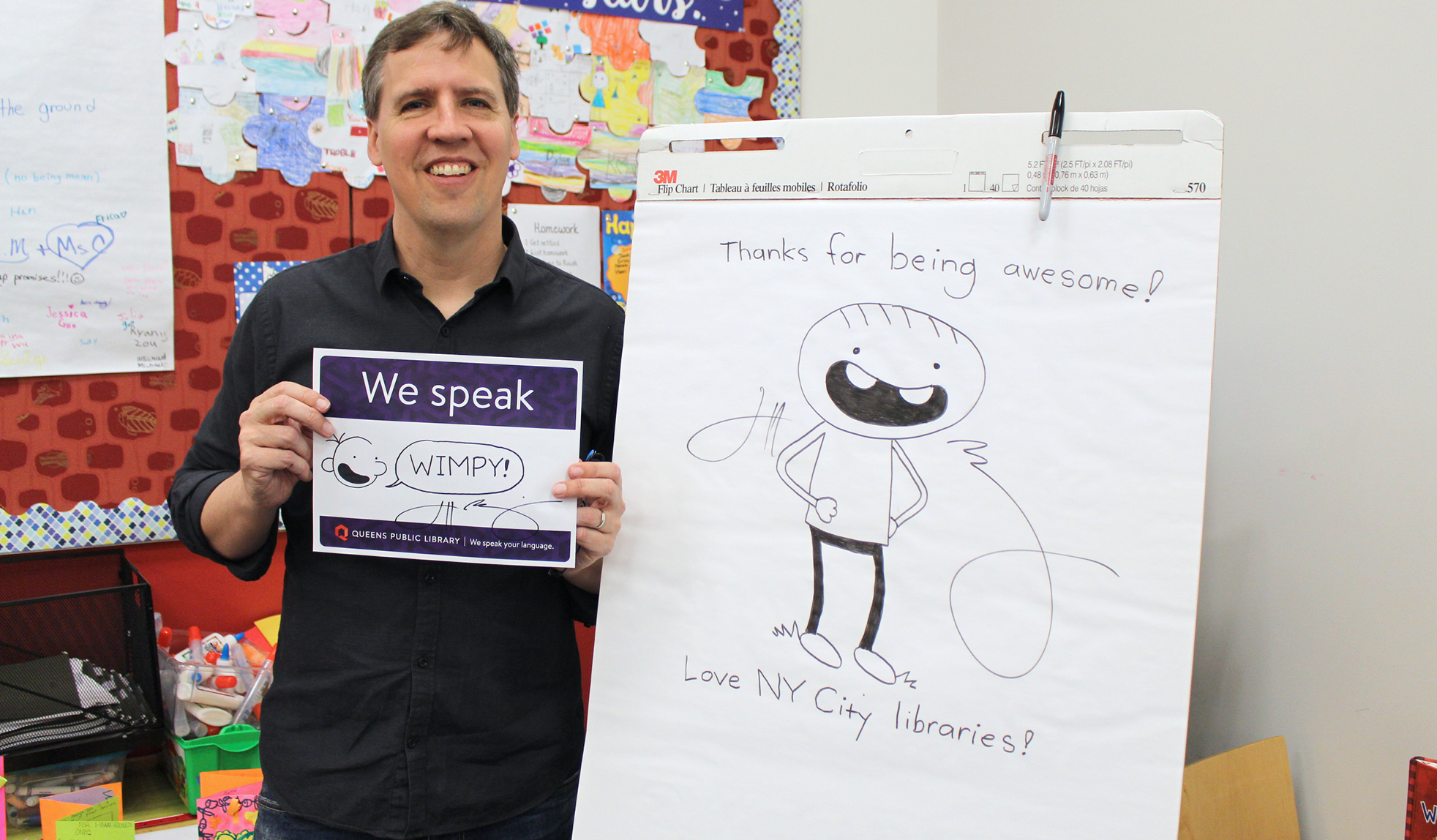 Jeff Kinney, the author of the bestselling Diary of a Wimpy Kid series, visited Queens Public Library on April 9, the day he launched his new book, Diary of an Awesome Friendly Kid: Rowley Jefferson’s Journal.

When Kinney completed the book, he and his team pondered fun and thoughtful ways to launch it. Unlike the previous Wimpy Kid books, Diary of An Awesome Friendly Kid is written from the perspective of Rowley Jefferson, the ever-cheerful best friend of Diary of a Wimpy Kid protagonist Greg Heffley.

The team decided to focus the launch on Rowley’s good nature. To highlight his friendliness, Kinney would go on a book tour and ride an “Awesome Friendly Party Bus” across New York City and New Jersey, meeting with over 40 “awesome friendly people” during the first week of the book’s publication.

He found many of these people right here, at Queens Public Library, where his books had claimed the first nine spots among the top 10 most frequently checked-out children’s books and overall books in 2018.

QPL got on his radar after he had learned about the Library’s “It’s Time for Kind” campaign, a series of programs and activities held over the 2018 holiday season that gave the public and our staff opportunities to spread and perform acts of kindness, ranging from sending messages to hospitalized children and troops overseas to making blankets for animals at shelters.

Students attending our STACKS after-school program at Flushing Library, who as part of the campaign had made cards and bookmarks for the library’s homebound customers, instantly caught Kinney’s attention. 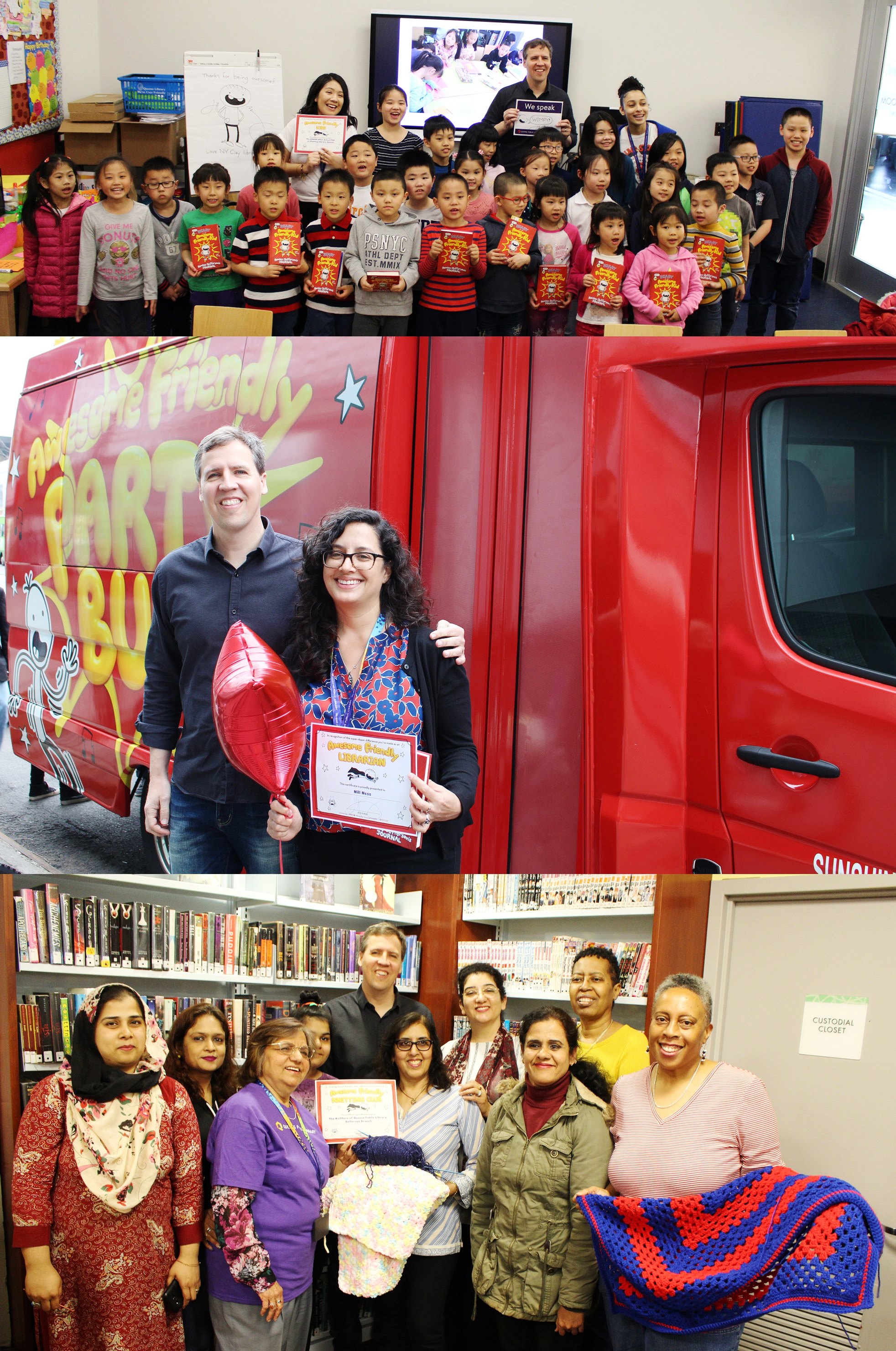 “We heard about you guys all the way in Massachusetts, and we really wanted to thank you for what you’re doing here,” Kinney told the children during his visit. “You used your free time to help people who don’t get to get out to the world, and what’s really cool about what you’re doing is that every time they see that card it makes them happy again.”

Kinney, whose books have sold 200 million copies worldwide and been made into four feature films, also spoke with the children about the importance of being kind. He then showed them how to draw Rowley and answered their questions, reassuring them that they don’t have to worry about the future adventures of their beloved characters.

“When will you stop making books?” one child asked. “When I die, and hopefully that won’t be anytime soon,” Kinney quipped.

Kinney also met with QPL’s first and only correctional services librarian, Nili Ness, who delivers books and other reading materials to Rikers Island inmates and monitors Video Visitation, a program which allows families to visit via video calls with relatives incarcerated at Rikers, so they don’t have to make the difficult trip to the jail.

The author also made a stop at our Bellerose branch to meet with its knitting club. Headed by Senior Librarian Qamar Jaffery, the club donates hats to homeless shelters and to local hospitals for their cancer patients.

Thanks for your visit, Mr. Kinney. It was an Awesome Friendly Day at Queens Public Library!