Hot New Book Releases in May and June 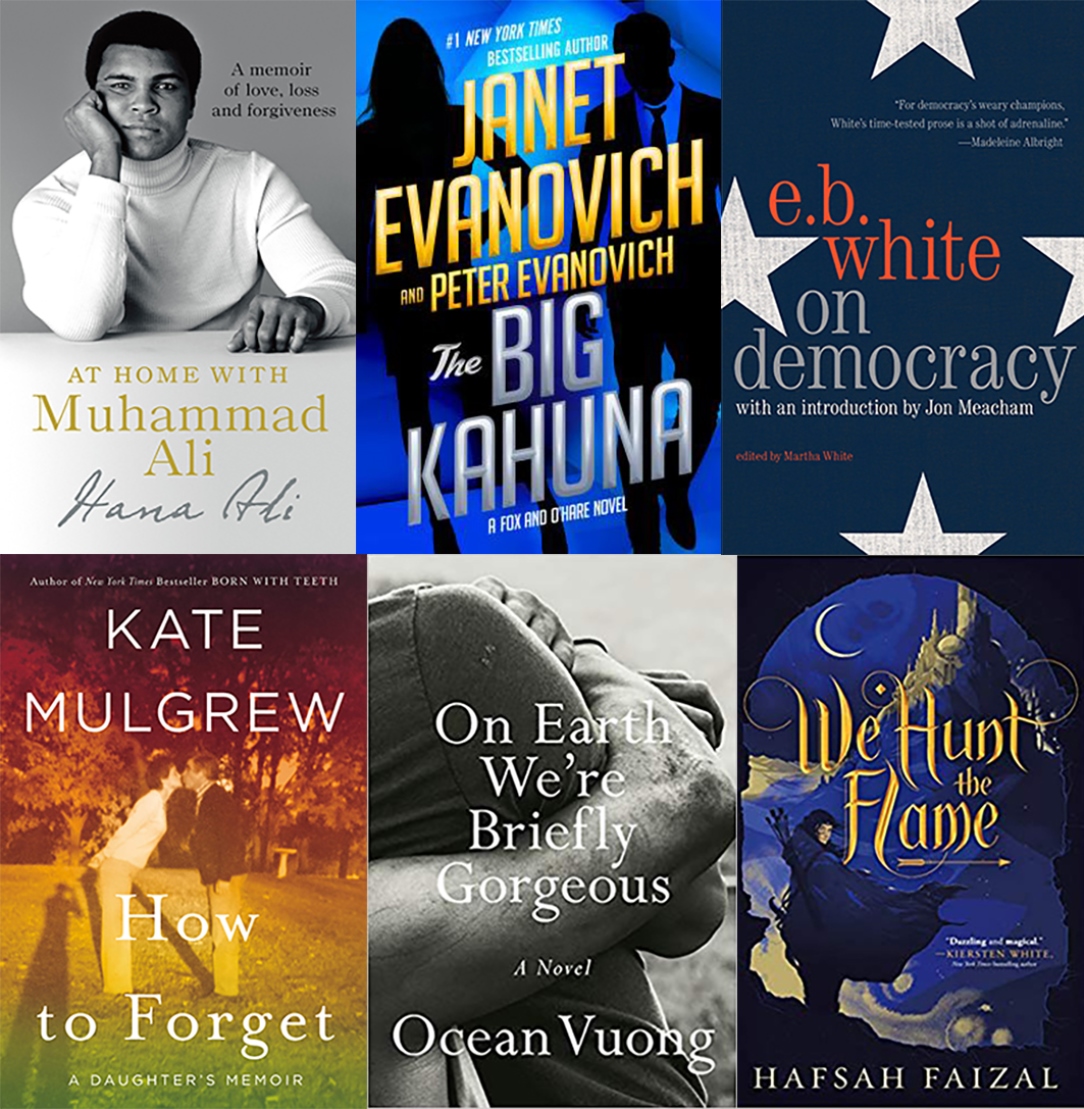 Here are some of the new books coming to the Library—from thrillers to memoirs.

May 7, 2019
At Home with Muhammad Ali: A Memoir of Love, Loss, and Forgiveness
by Hana Ali
Muhammad Ali’s daughter uses personal recordings the legendary boxer made beginning in the 1970s to craft an intimate portrait of his life, especially with his nine children.

May 7, 2019
The Big Kahuna
by Janet Evanovich and Peter Evanovich
FBI agent Kate O’Hare teams up with con man Nicholas Fox to go undercover in search of leads about the disappearance of a Silicon Valley billionaire.

May 7, 2019
On Democracy
by E.B. White, introduction by Jon Meacham
Written in the late 1940s by one of last century’s most eloquent men of letters, this collection is introduced by Pulitzer Prize-winning historian Jon Meacham, who explains its relevance, timeliness, and hope.

May 7, 2019
The Pioneers: The Heroic Story of the Settlers Who Brought America West
by David McCullough
Pulitzer Prize-winning historian David McCullough tackles the settling of the American West through the story of five individuals who set out to live in the Northwest Territory. McCullough draws on a little-known collection of letters and diaries to describe their challenges, ambitions, and ultimate triumphs.

May 14, 2019
If She Wakes
by Michael Koryta
The New York Times-bestselling author crafts a masterful thriller about two women—one a victim of a suspicious crash and the other the insurance investigator assigned to her case—who both become the targets of a mysterious killer.

May 14, 2019
Resistance Women
by Jennifer Chiaverini
Based on true stories, this novel traces the adventures of several women, led by Mildred Fish Harnack, to bring down the Third Reich from within.

May 14, 2019
We Hunt the Flame
by Hafsah Faizal
This highly anticipated and critically acclaimed YA fantasy is the debut novel from Faizal. When two legendary individuals are sent on the same quest to find a lost artifact that can stop a war, they face an unknown threat from the artifact itself.

May 21, 2019
How to Forget: A Daughter’s Memory
by Kate Mulgrew
Orange is the New Black star Mulgrew details the heartwarming and heartbreaking experience of returning to her hometown in Iowa to care for her ailing parents.

May 28, 2019
Queen Bee
by Dorothea Benton Frank
This family saga from the New York Times-bestselling author takes place on Sullivan’s Island, the Carolina setting she has mined before in her stories of the natural world.

June 18, 2019
Summer of ‘69
by Elin Hilderbrand
The first historical novel by the prolific New York Times-bestselling author explores the changing lives of four siblings over the course of a summer of national upheaval.

May 14, 2019
We Contain Multitudes
by Sarah Henstra
In this YA novel, two boys develop a relationship through letters they write to each other as a school project.

June 4, 2019
On Earth We’re Briefly Gorgeous
by Ocean Vuong
Written as a letter from a son to a mother who cannot read, this first novel from acclaimed poet Vuong explores secrets and revelations by the narrator, who is in his late twenties.