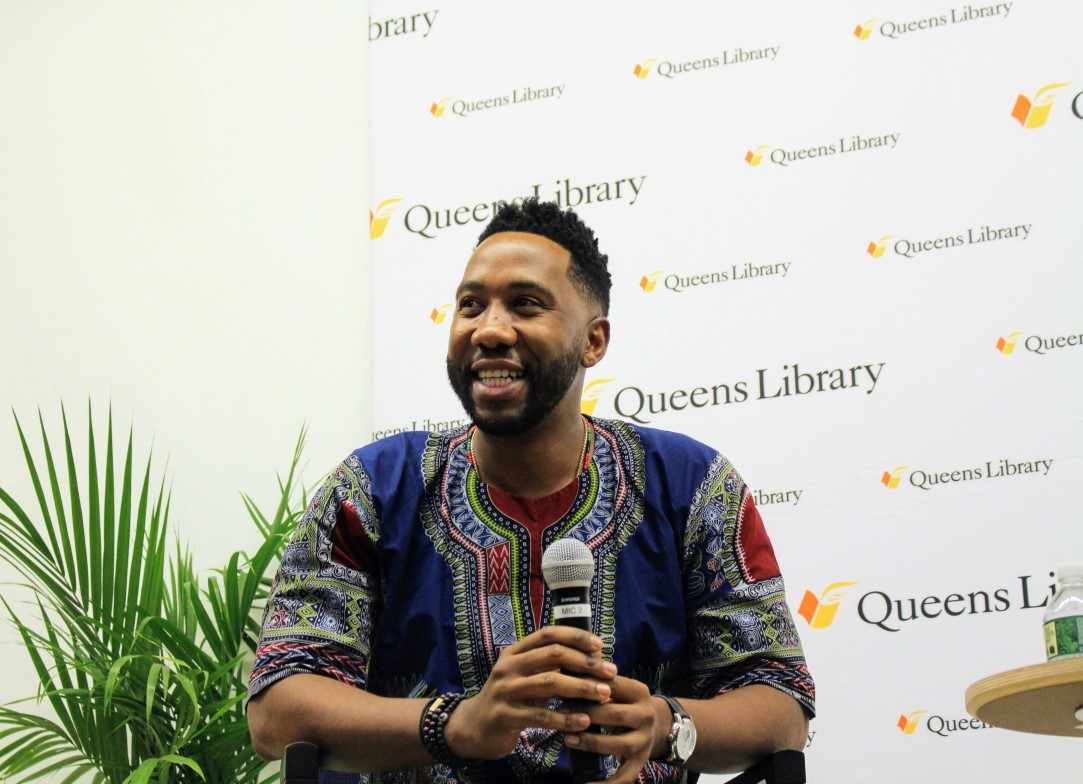 Ndaba Mandela, a 35-year-old grandson of legendary South African leader Nelson Mandela, came to the Library this fall to discuss his new book about his grandfather’s lessons.

Queens Library Hip Hop Coordinator Ralph McDaniels was excited to bring Mandela to Central Library for our author talk. Mandela and McDaniels both work internationally with the Universal Hip Hop Museum, and Ralph wanted Ndaba to also see the borough of Queens and learn more about its contribution to hip-hop culture.

Going to the Mountain is named after the ritual of becoming a man that Ndaba experienced at age 21. The rite of passage, which most experience between the ages of 18-21, involves going to a secluded location for 4-6 weeks to be circumcised. The experience is one of deprivation, as it is recommended not to drink any water during the first week to avoid additional pain. Ndaba described the experience as one of claiming your lineage and coming to understand what you represent, as physical pain shifts to spiritual and emotional pain. You emerge from the monthlong experience, considered a man. The audience asked Ndaba, a father of two young children, whether he would have his son undergo the circumcision ritual, to which he replied that his son doesn’t have a choice—he will definitely experience going to the mountain.

President and CEO Dennis M. Walcott interviewed Ndaba before turning the microphone over to the enthusiastic audience for questions. Ndaba shared that he was impressed by his grandfather’s compassion, noting that it came from Nelson’s belief that we all have the potential to achieve greatness. He remembered that celebrities such as Michael Jackson visited Nelson and he treated them the same way he treated the cook, driver, or gardener. The first time he met Nelson, he was eight years old and the elder Mandela was imprisoned in a house with a swimming pool. Ndaba decided then he wanted to go to jail when he grew up. Later, discovering what most jails were really like, this aspiration evaporated.

His grandfather was hard on him, to teach him responsibility. The second time Ndaba lost his school sweater, at age eleven, Nelson told him to sleep outside. While he didn’t follow through on this threat, he cautioned Ndaba that if he lost a third sweater, he would indeed have to sleep outside—and Ndaba never lost the sweater again.

Ndaba spoke of the importance of mentorship and encouraged the audience to sit with a young person one hour per week, to ask them about their struggles and hopes. “Dream so big your dream scares you,” Ndaba urged young people, referring to his grandfather, Martin Luther King, Jr., and Harriet Tubman as people who began their journeys with a dream. “The more you fail, the more you learn. Overnight success takes ten years.” Failure, he explained, is part of success. He also cautioned that there is no cutting corners and it takes getting your hands dirty to achieve your goals.

Ndaba, calling Nelson the “greatest example of leadership in the 21st century,” discussed the need to continue his Mandela legacy, calling it more of a blessing than a curse, one that opens doors for him but also comes with high expectations. Joking, Ndaba explained how because his grandfather’s face is on South African money, some people think his family gets some of that money. He recalled the pain his father experienced as a child of having to leave the country and change his name due to the police pursuing Nelson Mandela.

Ndaba said “going to the mountain” has a second meaning—referring to young black people trying to be successful who have to climb many mountains. Nelson Mandela famously said, “After climbing a great hill, one only finds that there are many more hills to climb.”

“We don’t understand our own power,” Ndaba said, discussing the NFL and the controversy over players’ kneeling protests. He speculated that if every player participated, society would have to take note. He asked where the support for Colin Kaepernick was, suggesting that some players are more concerned about their future or finances than about standing up for what is right.

Asked by a student from the broadcast journalism program at Cambria Heights about how he would achieve racial reunification, Ndaba praised this as a beautiful goal but expressed that his focus is first on African unity—and that he sees his first and foremost responsibility to Africa.

While his grandfather broke physical chains, he wants to break mental chains that Africans suffer from. He expressed that, under apartheid, the enemy was clear to see—a judge or a police officer—while now the enemy lies within, “in our mind.”

One of his goals is to break the cycle of poverty through his foundation Africa Rising, which works to empower youth and to celebrate African culture. At the time of his library visit, they had just completed a three-month coding project for sixty kids in his village. Many of the students who graduate from high school there never touch a computer, Ndaba explained.

When asked about the election of Donald Trump in the United States, Ndaba suggested Nelson would be disappointed, encouraging people to get more involved in civic society and to make sure to vote for all of the offices of government, such as mayor and council members, not just the president.

This year, while celebrating 100 years of Nelson Mandela, Ndaba wants to present him as a grandfather rather than as a president, so that he is more relatable to young people, who may have their own memories of being told a story by a grandparent.

Watch the Video of our author talk with Ndaba Mandela. 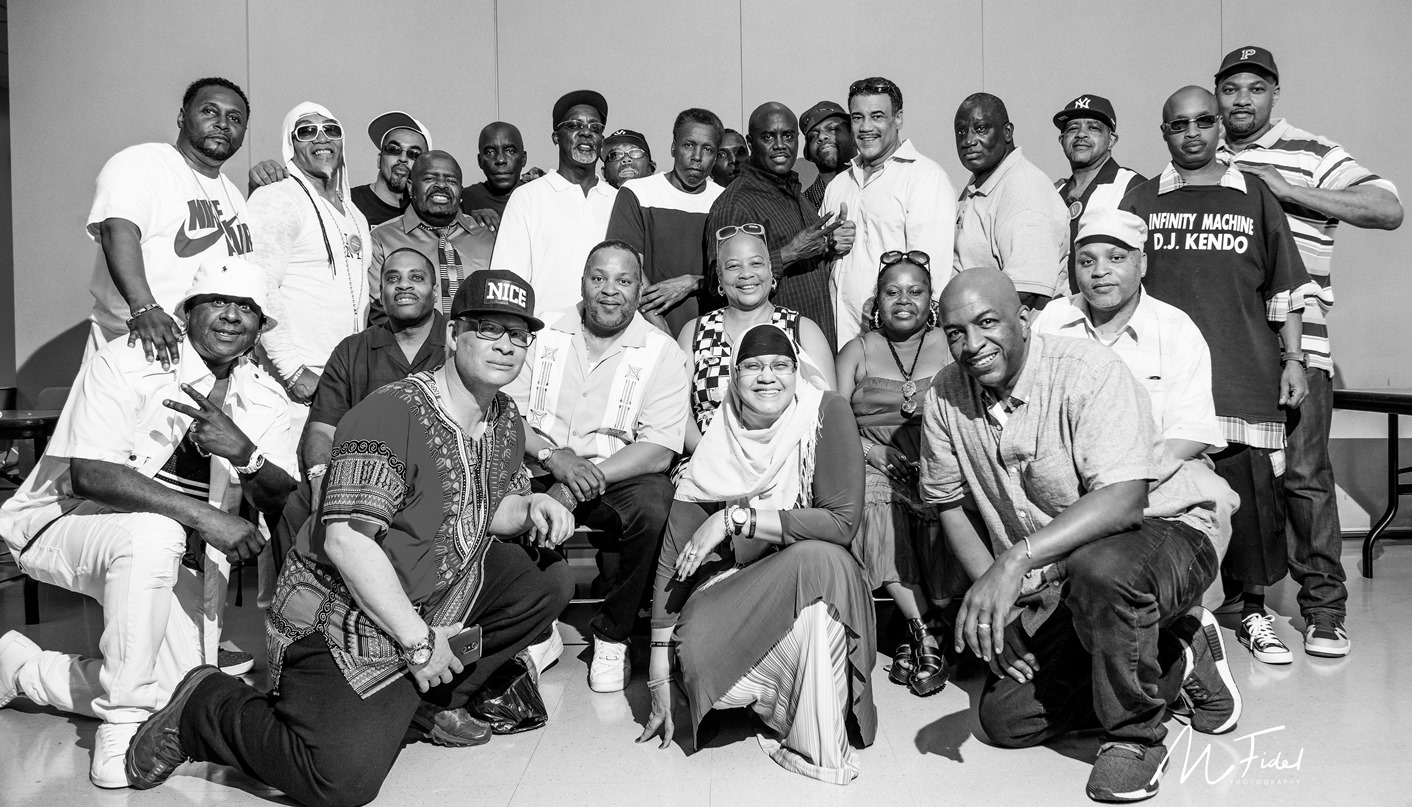