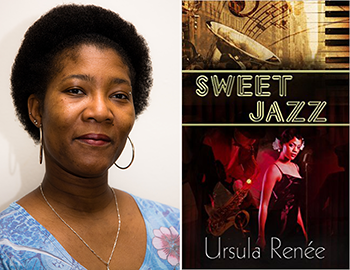 We’re excited for our upcoming book salon on Tuesday, January 19, “The Diversity of Romance,” where four talented romance authors—Ursula Renée, Jean C. Joachim, LaQuette, and Kate McMurray—will discuss the romance genre, their works, the need for diverse representations in romance, and what it’s like to be an author in today’s publishing industry.

Ursula Renée was kind enough to answer some questions for us before our January 19 event.

In the spirit of romance, we won't reveal all of Ursula's answers right away! Check back with us every day until January 19 to hear her thoughts.

You became a writer, artist, and photographer by going “from wishing to doing.” Can you talk more about how you found the courage to pursue your artistic goals?
I found the courage when I realized my fear of regret was greater than my fear of failure. I did not want to spend the rest of my life wishing I had done something. Instead, I wanted to enjoy the satisfaction of having at least tried.

You describe your novels as “multicultural historical romances.” How did you decide to write in that specific a genre?
Writing multicultural historical romances gives me the opportunity to explore how diverse groups interact during various time periods. As in the real world, not all the experiences in my books will be pleasant, but my characters will have opportunities to learn from each other and grow as a result.

You’re the past President of Romance Writers of America, New York City. How has that organization helped you and other writers?
Romance Writers of America creates programs that educate authors at every stage of their career. They also promote the romance genre to the general public. As a member of RWA/NYC, I am surrounded by other authors who understand the difficulties of putting words to paper, the pain of rejection, and the anxiety of putting a creation out there for the world to see. The members of my chapter are encouraging, willing to lend a shoulder to cry on, and offer words of encouragement and praise.

You and your fellow writers will talk to our audience about “diverse romance,” romantic fiction that includes people from different cultures, sexual orientations, and more. Can you talk about why supporting diverse romance is so important?
Some people shy away from books with a diverse cast of characters because they believe they cannot relate to them. Our society is composed of people from different backgrounds with various interests. Diverse romance not only reflects these differences, but it demonstrates that despite everything that sets people apart from each other, we have in common the desire to love and be loved.

Some people say romantic fiction is damaging because it creates unrealistic expectations. What is your response to that?
The characters in a romance novel must overcome internal and external conflicts to reach their happily-ever-after or happy-for-now. They are strong and persevere, despite the obstacles tossed in their paths. And their love interests respect them for their achievements and love them despite their flaws. Just like a reader of mystery novels does not expect to step out her door and suddenly become embroiled in a case that will have her involved in high-speed chases and shootouts, a reader of romance novels does not expect to be swept off her feet going about her everyday routine. However, it shouldn’t be unrealistic to expect respect, faithfulness, and love in a relationship.

What advice do you have for other aspiring novelists?
If you want to write a novel, then sit down and write it! Once you have finished writing, understand that you still have a long road ahead of you. No matter the direction you want to take your career, whether traditionally published or self-published, you will have to spend time honing your craft, editing your work, and marketing yourself.

Also, do not go into this expecting you will get rich overnight. The overnight successes are few. We write because we have stories inside us that have to come out.

In 2008, Ursula went from wishing to doing when she purchased a digital camera and registered for an online photography class. Armed with the knowledge she obtained from the class, she spent weekends touring New York with her camera until she finally captured the perfect shot of a sleeping red panda at the Bronx Zoo.

Excited by what she could do when she put her mind to it, Ursula decided to pursue other dreams, including drawing, sculpting, and writing. She dusted off the manuscript she completed years earlier and took advantage of the workshops and conferences offered by the Romance Writers of America, New York City. Thanks to the support and encouragement of the members of RWA/NYC, who would not let her give up after she received rejections, Ursula signed her first publishing contract for her historical romance, Sweet Jazz, which was released in 2014 by The Wild Rose Press, followed by A Bookie’s Odds a year later.

An Interview with Romance Author Ursula…

We’re excited for our upcoming book salon on Tuesday, January 19, “…