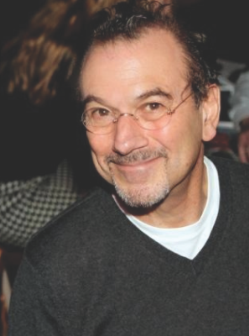 We were very pleased to speak with Russ Titelman before his lecture on April 4 at the Central Library and hear his quick thoughts on his nearly five decades playing, writing and producing music.

You’ve won three Grammy Awards for producing. Can you tell us a little about each win?
Our first Grammy win was Record of the Year for Steve Winwood's “Higher Love” (1986). I had a feeling that we would win, but the competition was so steep that it came as a surprise. That record was extremely complicated to make and it took a long time. A lot of technical work went into it because it's an amalgam of man and machine, about half and half. The trick was making it feel natural.

The second and third Grammys were for “Tears In Heaven” (1992’s Record of the Year) and Unplugged (1992’s Album of the Year) by Eric Clapton. “Tears in Heaven” was recorded for the film Rush and was on its soundtrack. Unplugged was done as a show and not for release on CD. Eric didn't feel comfortable releasing it but eventually agreed to do it after much cajoling from the record company. No one imagined it would become so enormous and beloved.

Which era of music has inspired you the most?
The era that inspired me the most was the music I heard in my youth...primarily doo wop, Louis Armstrong and Leadbelly. But I also loved Sinatra and Billie Holiday and the stuff that was on the radio then.

What was it like working with Eric Clapton?
Working with Eric was an amazing experience. He's an incredible musician in every sense and extremely professional in the studio. The greatest rhythm guitarist I’ve ever heard. He's a great songwriter, a great singer and maybe the greatest guitar player that ever lived. When we first went in, I was extremely nervous, not knowing how he worked, so I overbooked musicians just in case. In addition to the core band, we had drum machine and two keyboard players, and Jerry Williams, who wrote five of the songs on Journeyman, was there on guitar and harmony vocals. It all fell into place.

What do you think about the mass digitalization of music?  How has it affected the art of making an album?
Technology has definitely changed the way music is made. Now, one person can create a whole album in his living room on a computer. The community that supported the process of making records has pretty much disappeared. The studios, musicians, engineers and assistants, cartage companies, etc. have only a fraction of the work they once had. It's the thing I miss the most...a group of musicians playing together in a room, coming up with grooves and arrangements and fabulous accidents which sometimes made the record magical. Don't get me wrong, there is still good music being made — but the process is different and not as much fun.

What do you like best about producing records?
I suppose the thing I like best is making something wonderful from a simple song...breathing life into it.