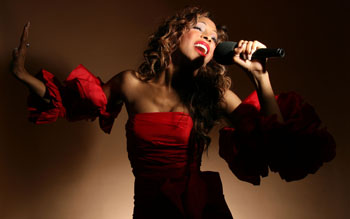 Currently appearing on Broadway as Mary Wells in Motown the Musical, N'Kenge is one of the most versatile new performers in the world of popular and classical music. She has appeared at the White House and the United Nations, has taken lead roles in operas by composers ranging from Mozart to Puccini and has given more than 100 solo recitals around the world. In anticipation of her upcoming performance at Central Library, we sat down with her to discuss her inspiration, connection to Queens and what she's up to next.

You are able to perform at such a high level in so many musical styles, do you prefer one genre of music over another?

I actually like the versatility of switching back and forth.  I'm not sure what I would do if I was forced to choose just one, although I've been in situations where people have tried to make me choose...  each genre has its only uniqueness and I love them all!

What was the best part of portraying Mary Wells in Motown the Musical on Broadway? Was she an idol of yours previously?

Mary Wells has always been an idol of mine. I grew up on Motown music. My parents were big fans and loved the hit song My Guy. The best parts of portraying Mary is being able to sing this classic hit every night on stage.

I understand you have a close relationship with Berry Gordy, the founder of the Motown record label and producer of Motown the Musical on Broadway. Did that friendship help to inform your role? Did you consult with him on your interpretation of the character?

Berry Gordy has been an amazing mentor to me. It was really wonderful to be able to get first hand knowledge about Mary Wells and their working relationship. Truly inspiring. He told me I reminded him of her and her tenacity.

Can you tell us a little about your experience at Fiorello H. LaGuardia High School for the Performing Arts?

After I was accepted, I remember begging my mom to let me go there. The experience was a milestone, it really started me on my journey to Broadway. It was the first time I was exposed to classical music and made me realize that music was the path I wanted for career. I loved being able to focus on both academics and musical performance and I met lifelonge friends there.

Your late father was a math college professor at Queens College for twenty-five years. Can you share some memories with us?

Not only was he a math professor, but he was very involved in the SEEK (Search for Education, Elevation, and Knowledge) program for high school seniors who might not attend college. He also helped train aspiring math teachers and was involved in the music department, where he helped organize a few concerts for me to perform in.

I remember going to Queens College many times to visit and seeing how loved and respected he was by both his colleagues and students. He was always donating his time to help students after class, yet he found time to travel with me overseas to attend my concerts. He never missed a New York show of mine. He was definitely the President of my fan club.

You were awarded both Miss New York State Talented Teen and the Miss Manhattan crown in Miss America competition. How do you think this has helped shape your career?

It helped me obtain scholarship money for college and was an opportunity to gain experience performing in front of a large audience. Having talent isn't enough. You need to know how to present yourself as a strong and positive role model.  Doing these competitions helped me to develop that part of my self.

Can you describe a time when you auditioned for a role you did not get and how you were able to handle it?

In this business people will say no more than they say yes. It's best for any artist to start accepting that sooner than later. In the beginning of my career I took things very personally. The more experienced I became, the more I realized that nothing is ever personal. There are so many factors that go into these decisions and it's out of our control. What I just needed to focus on was always going in and doing my very best. What is meant to be will be.

Who are several of your all-time favorite musical composers?

There are so many. The top that come to mind are Leonard Bernstein, Andre Previn, Chopin and Stephen Schwartz.

What project would you love to do next?

I would love to have my recording project get picked up and develop a new Musical I've been conceptualizing.

Currently appearing on Broadway as Mary Wells in Motown the Musical…