At Queens Library, a Personal Memory of Dr. King 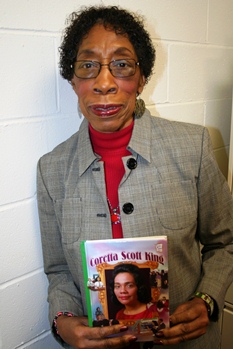 The passing of time is changing the way Americans recognize Martin Luther King Jr. Day, at Queens Library and around the country. Each year, a larger percentage of the population was not alive before the famed civil rights leader was assassinated on April 4, 1968.

Keeping Dr. King’s memory alive is especially important to Johnnie Dent, Community Library Manager at Queens Library at East Elmhurst -- and not just because she works in one of the most-established African-American neighborhoods in Queens.

Dent, who has been with the library for nearly 39 years, is the cousin of the late Coretta Scott King, Dr. King’s widow. They grew up together in Marion, Alabama and came of age as the fight against segregation was coming to a head.

She organizes library events like jazz tributes and student discussions of Dr. King, along with helping to run two college scholarship programs with church groups in East Elmhurst.

“Every program that we do, I will say, ‘I need you to know that Mrs. King and I were first cousins,’” Dent says of her interactions with young people. “I’ll tell them that my mother went to jail. I’ll tell them that my mother went across the Selma bridge [as part of the 1965 march on Montgomery, Alabama]. … I’ll do anything to let them know that what he did was for real—it wasn’t just something you read about.”

Through it all, Coretta Scott King supported her husband. Dent remembers her as a strong woman taking a support role for the sake of a noble cause.

“She was her own person; an opera singer, even after they were married and their first kid came,” Dent says. “She was touring while she was pregnant, to fund the movement.”

Dent says that, along with attending memorial events, the best way to honor the legacy of Dr. King and Coretta Scott King is to get involved in community service.

“It was about the downtrodden, that was his biggest thing—the poor,” she says. “With Hurricane Sandy, I’ve seen so many things, subtle things going on that people are doing—that’s the kind of service that he was about and that we want to see rendered.”

At Queens Library, a Personal Memory of…

The passing of time is changing the way Americans recognize Martin…